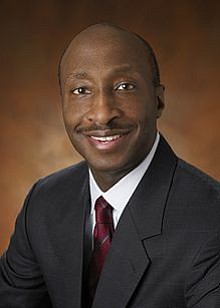 "America's leaders must honor our fundamental values by clearly rejecting expressions of hatred, bigotry and group supremacy," Frazier said in a statement posted on Twitter by the company.

Trump immediately responded on Twitter with an attack on Frazier, saying his resignation will give him "more time to LOWER RIPOFF DRUG PRICES!"

Frazier is one of the country's most prominent black corporate executives. Trump cited violence "on many sides" after neo-Nazis and white nationalists clashed with counter-protesters in Charlottesville, Virginia, over the weekend.

Frazier's exit marks another rebuke to Trump from corporate America. Trump's June 1 decision to leave the Paris climate accord led Tesla CEO Elon Musk to step down from the manufacturing panel as well as a separate business advisory council.