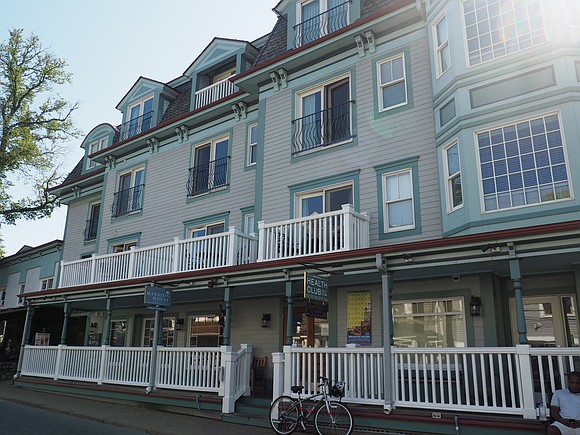 Every August, an influx of middle- to upper-class African-Americans retreat to the small island of Martha’s Vineyard, just off the coast of Massachusetts, to conclude the summer with beach days and dinner parties among old friends from all over the country. This annual roundup, however, is nothing new. Wealthy African-Americans have been flocking to this island since the 1920s, once former servants became property owners and small business entrepreneurs (primarily in the town of Oak Bluffs) and began to offer accommodations to other African-Americans—ultimately becoming one of the first resort towns that welcomed us. This environment attracted vacationers from big cities such as Boston, New York and Philadelphia (as well as other Northeastern cities) who could afford to travel there.

During that time, Oak Bluffs’ town beach became a local hangout for those African-Americans vacationing and was quickly given the disparaging nickname “The Inkwell” by local white islanders. However, The Inkwell is one of the most famous beaches across the country to transform its offensive and vile nickname into a symbol of pride.

To this day, Inkwell is still a popular spot for those vacationing, and many of the Black-owned cottages still belong to the decedents of those African-Americans who first bought land on the island. What has changed is where all of these Black vacationers call home. No longer is Martha’s Vineyard just for those wanting to flee the big cities of the Northeast in the summer. Thanks to the popularity of HBCUs in African-American communities, since the ’60s many students shared the gem of Martha’s Vineyard with their classmates, often times inviting them to experience it for themselves, sending a new generation of Southerners to the island. And thanks to President Obama’s annual trips to the Vineyard, which began before his presidency, mid-Westerners and the Black political scene of D.C. have been making a splash there as well.

Martha’s Vineyard is a historic African-American resort community that should be experienced by all, both young and old, but getting there can be a little tricky. There is an airport on the island, but if you’re looking to land there at any time during peak season expect to pay a minimum of $700 per ticket, which is insane because you could get to Europe for that price. Instead, fly into a large airport nearby, and then take a ferry. We started our trip in Boston, so we drove a little over an hour and a half to Woods Hole, Mass., and took a ferry from there to Oak Bluffs. They say the ferry takes approximately an hour from dock to dock, but I swear we got there in 40 minutes or so. Aside from being much cheaper than flying, taking a ferry has the added bonus of allowing you to also ferry over your car, which I highly recommend you have if you really want to experience the entire island.

For most, the ideal trip to the Vineyard is set in a cottage in Oak Bluffs near the sea, where you could walk from the ocean to the town center. But there is a very limited number of cottages on the island, and as I mentioned before, people whose families have been vacationing here for generations own them—and they are usually still vacationing there for month of August. If you have your heart set on renting a cottage, do so far in advance. Most people who are renting book their cabins a year in advance, usually as they’re checking out the previous year. Don’t be afraid to ask your friends if they have a house on the island or know someone who does. You’d be surprised how few degrees of separation it would take before you found someone who did. I should note that most houses on the island do not have central air conditioning. So if that doesn’t work for you or if you aren’t able to rent a cottage, do not let that deter you from visiting. Although there aren’t many on the island, you could rent a room in a hotel.

While there, I stayed in two different hotels, neither of which was in Oaks Bluff. The first was in Edgartown, a picturesque Cape Cod Island community found on the far eastern end of the island. There we stayed in the Kelley House, a charming hotel that has been celebrated as one of the oldest in America. The hotel was undergoing a renovation on the first floor and outdoors—which I have it admit was incredibly annoying—but it was incredibly cozy in our rooms. The décor was that of an understated nautical theme, the trimmings and bathroom appliances were all very modern and that bed was one of the softest I have slept in while on vacation. The front desk attendant was very helpful in giving us tips on what to do or experience, but the hotel itself was within walking distance of dozens of restaurants and shops and the small Edgartown harbor, making it the perfect place to use as “home base.” Out back there’s a decent sized pool and a small dining area that comes alive around sunset with live music and a crowd of diners.

In Tisbury, a little town right next door to Oak Bluffs, we stayed in Mansion Inn, a hotel that felt much more like a resort than a bed-and-breakfast. Guests are encouraged to use the hotel’s health club—complete with gym equipment, access to classes such as yoga, a pool, a sauna and much more—for free. Another perk at this hotel is guests can borrow beach chairs at no cost, which is huge because there are no rental companies on the beaches and most visitors are forced to purchase their own chairs at a local store. Just outside the hotel are shops, restaurants and even a movie theater. You honestly can’t go wrong staying at either one of these properties.

Check back next week as I complete my guide to Martha’s Vineyard.