Liberty in the pink after win over Sparks 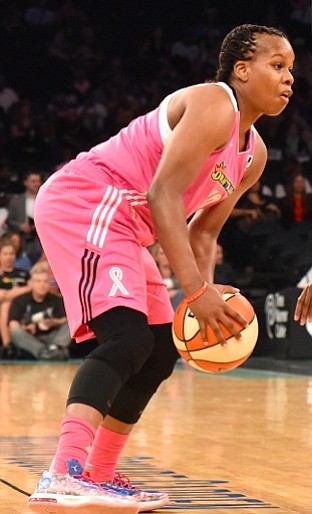 Sunday, the New York Liberty overcame a rough first quarter to notch its third consecutive win with a powerful, team-driven 83-69 victory over the Los Angeles Sparks. Tina Charles led in scoring, but Shavonte Zellous and Epiphanny Prince were also powerful offensive presences. Add in solid rebounding from Kia Vaughn, big assists from Bria Hartley and two huge three-pointers from Sugar Rodgers, and you have a strong team victory.

“We’re starting to understand who we are,” said coach Bill Laimbeer. “We played very hard.” The Liberty came into the game having lost to the Sparks twice this season.

Of course, the more wins the Liberty, the better the seeding in the playoffs. After Sunday’s win, New York stood fifth in the WNBA. Laimbeer said the win also boosts confidence and raises spirits as the playoffs approach.

“If we continue on this train, then we’ll be OK,” said Laimbeer. “We know what’s in front of us and we’re pretty focused right now.”

Hartley said that starting in the second quarter, the Liberty clogged the paint more and forced the Sparks to settle for jump shots. “We just want to keep building on this … and make sure we maintain this energy,” Hartley said.

Sunday’s game was Breast Health Awareness Day, with audience members holding up signs about people in their lives affected by breast cancer. This display was moving to Sparks forward Tiffany Jackson-Jones, who played with the Liberty from 2007 to 2009 and is a breast cancer survivor.

“During the time when they told everyone to stand up, I almost cried to see so many survivors and people going through it now,” said Jackson-Jones. “I knew that’s where I was and how hard it was. It was really emotional. It means so much to see people go on with their lives. That was a big thing that helped me get through it.”

The Liberty play an away game Friday against the Connecticut Sun and return to Madison Square Garden against the Minnesota Lynx Sunday afternoon.