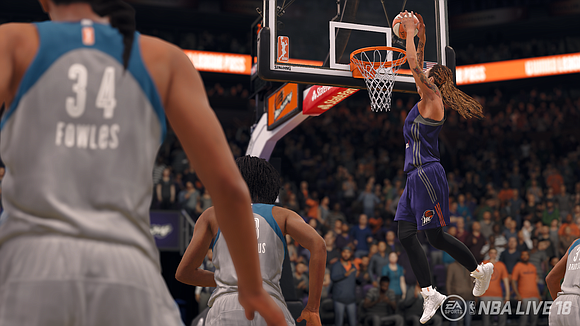 This fall, WNBA teams make their official video game debut as part of NBA Live 18, marking a first for the league and its teams. Throughout the season, Electronic Arts, Inc., maker of NBA Live 18, is doing high-resolution head scans of players such as Maya Moore, Sue Bird, Diana Taurasi, Chelsea Gray and Jonquel Jones.

“It’s about time,” said NBA Live executive producer Sean O’Brien. “When we look at what’s relevant in the world of basketball right now, the WNBA is one of those things.”

O’Brien said the corporate culture of Electronic Arts embraces inclusion and diversity. Two years ago, the company added women’s teams on its FIFA (soccer) game, and the reception was strong. Now is the time to do it with the WNBA.

Kelsey Plum, top pick in the 2017 WNBA Draft, took part in motion capture sessions that helped the video game developers bring authenticity. There has also been extensive research on movement and style of play so that the game, which will be available in the new play mode WNBA Play Now, looks and feels authentic.

“You’ll be able to go in and play with any of the 12 teams and any of the players,” said O’Brien. “The league, its teams and the players have been great to work with. They’ve embraced the inclusion in the game and are really excited about it.”

Jantel Lavender of the Los Angeles Sparks called it “the evolution of video games.”

“Maybe more girls will buy the games,” Lavender said. “[When I play] I’m definitely going to pick my teammates—Nneka [Ogwumike] and Candace [Parker] for sure.”

Members of the New York Liberty expect to have their faces scanned over the next couple of weeks. Center Kia Vaughn, who hopes her tattoos are accurate, is excited and vowed to play when it’s released, even though her Pac-Man era skills are a bit rusty. She will take on her younger brothers in a “competition night.”

Kiah Stokes said her younger brother is a gamer. Although she doesn’t play a lot, she will definitely try it out. “Every athlete—male or female—dreams of themselves as a video game character,” said Stokes. “The fact that this is actually coming true shows how far our league has come, but we still have a long way to go.”