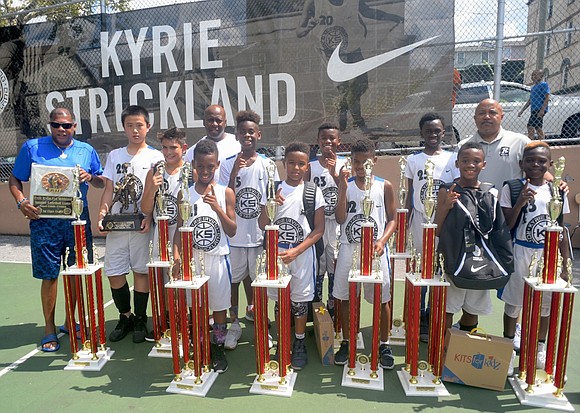 No national anthems. No agendas or platforms. No conscious or symbolic signs of solidarity. If it isn’t locked into a video game’s design, it seems nonessential to the children competing on the court for the biggest trophy given to the winners of the Kyrie Irving-Rod Strickland Summer Basketball League championships.

With friends and family gathered on East 149th Street, not far from Jackson and Third avenues in the Bronx, and Katt Keyes, Dwayne Mitchell, Wee Francis and Science Mapp, several of the city’s top basketball coaches screaming out specific directions to their players from the sidelines, at times having to compete with parents who think they know better, it’s as competitive as it can get for a teen and pre-teen ballplayer.

“You gotta coach and teach the children,” said Keyes, who, like Mitchell, Francis and Mapp, has won multiple championships in every prominent NYC league and tournament throughout his years of coaching. “I’ve been out here 40-plus years.”

“It’s what I do,” Keyes said, while making sure that his group was together after receiving their championship trophies from New York City basketball legend Rod Strickland, who’s done it for 20 years, and Kyrie Irving’s father, Drederick Irving.

“I develop my players, teach them, keep my teams together,” Keyes added. “Always have. I’m not just getting players from here and there just to win.”

Keyes wanted to talk as long as possible about the success of his program, but his immediate challenge was navigating his team and their entourage through the weekend traffic to another championship game that afternoon in Brooklyn.

The Irving-Strickland league comprises five divisions this season. The Itty Biddy won by Riverside Church 18-13 over the New York Rens; the Super Biddy division, which was decisively won by the Rens 41-18 over the Gauchos; the Rens again in the Biddy Division, 61-54 over the Wee All-Stars and 67-63 over Newburgh in the Midget Boys division. Midget Girls was won by the New York United over the Lady Bulldogs, 42-39.