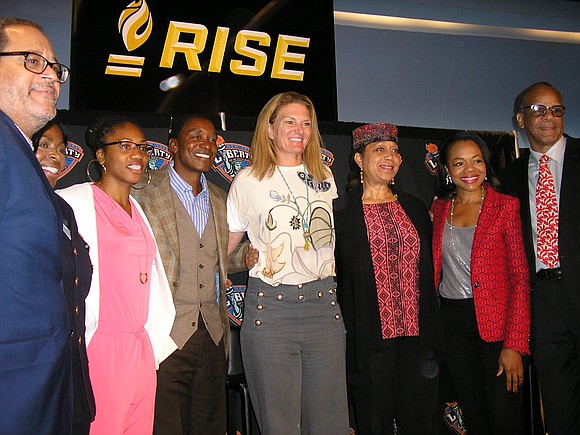 The panel at the RISE event Lois Elfman

In addition to a hard fought, important win over the Minnesota Lynx, last Sunday marked the New York Liberty’s first Unity Game. Before the national anthem, players linked arms with a diverse range of people, including members of the NYPD, participants in the Garden of Dreams Foundation and teammates of the late Shamoya McKenzie, a young player from Mount Vernon, who was hit by a stray bullet this past New Year’s Eve.

Liberty center Kia Vaughn, a Bronx native, addressed the crowd. “I just want to send one message out,” she said. “Let love win.”

Before the game, season ticket holders and others were invited to attend a panel put together by the Liberty and the Ross Initiative in Sports for Equality. Founded in 2015 by Miami Dolphins owner Stephen M. Ross, RISE has worked to harness the unifying power of sports to improve race relations and advance social change.

“We’ve done events with teams across the country for the past year with an eye toward recognizing that sports teams have a unique role to play in bringing people together to have these difficult conversations right now, and strategize as a sports community what we can do collectively to advance social change,” said Jocelyn Benson, RISE CEO.

The event held deep meaning for politically outspoken Liberty alumna Swin Cash, now the team’s director of franchise development. “Our players, our staff, have been working on this for months,” said Cash, who is about to give birth to her first child. “It’s about doing the work and keeping the conversation going.”

“It’s so incredibly timely, given everything that’s happening in the country,” said Clarke. “It is heartwarming to be here with the WNBA to promote themes of unity. These are principles we need in our country right now. Diversity, inclusion and respect for all Americans are so critical.”

The panel discussion ranged from Clarke speaking about the importance of defending people’s right to vote, to Rhoden applying the powerful sports analogy of studying game film, to studying previous social justice battles to learn how to strategize for success. Holmes spoke about programs she’s advocated for and cultivated during three decades with the police force, including more effective recruiting of people of color. Everyone agreed that spaces such as this one are needed for real and genuine dialogue.

“While we’re making progress, the progress is fragile,” said Clarke. “We’ve got to keep pushing to that next level. There is always more work we can do.”

Liberty team president Isiah Thomas was inspired by the event. “Sports is the place where America always comes to have the hard conversations,” said Thomas. “Our sports society is the place where you talk about love, equality and diversity truly existing. What we want to do is uplift that voice and put it out into society.”