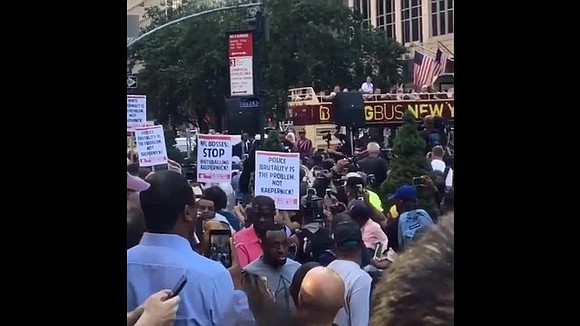 Rallies have taken place across the city in support of NFL quarterback Colin Kaepernick, whose silent protest during the national anthem at football games against cases of police brutality drew national attention.

Wednesday, the United We Stand rally for Kaepernick was held at the NFL Headquarters on Park Avenue. Several faith-based and civil organization took part in the rally, including the NAACP, the Rainbow PUSH Coalition, Justice League NYC and Kaepernick’s fraternity, Kappa Alpha Psi.

Kaepernick has been criticized, with his actions being labeled as “anti-cop.” The group at the rally consisted of active and retired NYPD officers and detectives who disagree. The 29-year-old, who is biracial, is currently a free agent and played six seasons with the San Francisco 49ers. Supporters say he is being blackballed over his protests. “It is clear the NFL’s intent to make an example out of Colin Kaepernick is rooted in white supremacy, which dismisses the reality of the dehumanization of Black bodies in America,” said the Rev. Stephen A. Green, president of The People’s Consortium for Human and Civil Rights, Inc. “Therefore, we are calling on people of good will to join us in New York to stand with Colin Kaepernick in this moral movement that will transform the nation.”

“When the NFL has a history of excusing players for egregious behaviors [including violence against women], it is clear team owners are making a statement when it comes to Kaepernick,” she said. “We as consumers, viewers and people of good moral conscience must make one as well.” Law enforcement officials, along with Council Member Jumaane Williams, gathered in Brooklyn last Saturday to show support for Kaepernick,

NYPD Sergeant Edwin Raymond, who is one of the NYPD 12, a group of officers who challenged the department’s practice of using quotas for arrests in Black and Brown communities, said he’s not offended by Kaepernick’s actions.

Detective Frank Serpico, the officer who exposed and testified against NYPD corruption in the 1970s, joined the gathering, as well as Damon Jones, the New York Representative of Blacks in Law Enforcement of America, and Detective Graham Wheatherspoon.