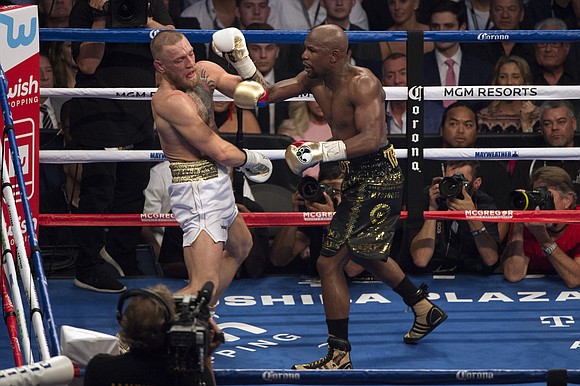 In a result that shocked few, Floyd Mayweather Jr. defeated Conor McGregor by technical knockout before a crowd of 14,623 at T-Mobile Arena in Las Vegas on Saturday, August, 26, 2017. Sam Morris/Las Vegas News Bure

(CNN) -- In a result that shocked few, Floyd Mayweather Jr. defeated Conor McGregor by technical knockout before a crowd of 14,623 at T-Mobile Arena in Las Vegas on Saturday.

McGregor, though, surprised many by going toe to toe with Mayweather until the 10th round.

"He's a lot better than I thought he was," Mayweather said after the bout.

Mayweather's record is now 50-0, surpassing Rocky Marciano, who went 49-0. After Saturday's win, Mayweather said this was the final fight of his career, calling McGregor "a hell of a champion."

"A win is a win, no matter how you get it," Mayweather said. "Rocky Marciano is a legend, and I look forward to going into the Hall of Fame one day."

Living up to the hype

The only certainty of this fight was that it would be a spectacle not seen before. It lived up to the hype.

Two different sports worlds collided into a 12-round junior middleweight boxing match: Mayweather, considered one of the best defensive boxers of all time, coming out of retirement at age 40, his last fight a unanimous decision victory over Andre Berto on September 12, 2015. McGregor, 29, is the current UFC lightweight champion and the most exciting draw in mixed martial arts today -- but it was his first professional boxing match.

It was billed as the first boxing-UFC crossover bout in history. It pitted youth vs experience. But it was a boxing fight with boxing rules, meaning McGregor couldn't kick or wrestle like he would in a UFC bout.

The speculation in the weeks leading up to the fight undeniably had Mayweather -- who hasn't lost since 1996 in the Olympics when he was an amateur -- as the heavy favorite. Heading into Saturday night, boxing aficionados viewed the fight as a joke.

It was no joke.

McGregor came out aggressive, throwing several punches in the first three rounds. Mayweather controlled the next three rounds, and it was close to an even fight through six.

But McGregor was running out of steam, and Mayweather took advantage, landing several blows on the exhausted Irishman in the 10th round.

Mayweather landed more punches than McGregor, 130-60, in rounds six through 10 after McGregor had a 51-40 edge in the first five rounds.

"Our game plan was to take our time, go to him, let him shoot his shots early and then take him out down the stretch," Mayweather said. "We know in MMA he fights for 25 minutes. After 25 minutes, he started to slow down. I guaranteed to everybody that this wouldn't go the distance."

McGregor said he thought it was an early stoppage by the referee.

"I get a little wobbly when I'm tired," he said. "But get me in the corner and I'll recover and I'll come back. There's a lot on the line here -- he should have let me keep going until I hit the floor. I was just a little fatigued. (Mayweather) was a lot more composed, especially in the later parts of the fight."