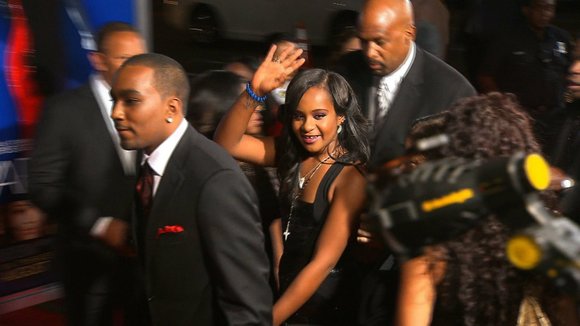 (CNN) -- The story of Bobbi Kristina Brown's life and tragic death is coming to the small screen.

TV One released the trailer Monday for the TV movie "Bobbi Kristina," which stars "Stuck in the Middle" actress Joy Rovaris in the title role.

Brown was the only child of the late superstar Whitney Houston and singer Bobby Brown.

The 22-year-old died in 2015, nearly six months after she was found unresponsive in the bathtub at her Roswell, Georgia, home.

She was found almost three years to the day after her mother accidentally drowned in a bathtub in Beverly Hills, a victim of the vices Houston had fought for much of her career.

The trailer for the film shows Brown struggling after her mother's death and at odds with others regarding her relationship with family friend Nick Gordon, played by Nadji Jeter, who starred in "Grown Ups."

"He's the single best thing that's happened to me since my mom," Rovaris as Brown yells at her aunt Pat Houston, who is played by Vivica A. Fox.

Gordon was found legally responsible for Brown's death last year and ordered by a Georgia judge to pay $36 million to her estate.

In June he was arrested in Florida on domestic battery and false imprisonment charges after his live-in girlfriend told Sanford Police he had hit her.

"Bobbi Kristina" will air on October 8.