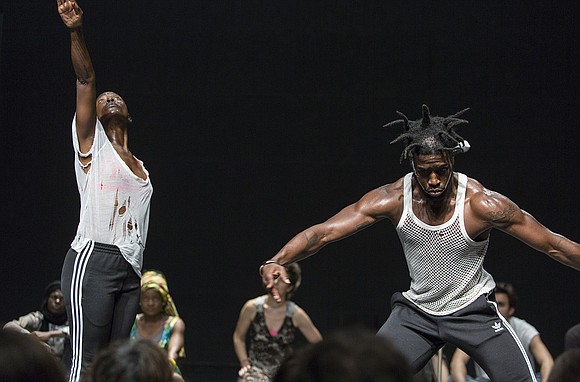 Linyekula returns to New York as part of BRIDGING: An International Dialogue on Diversity and Inclusion in the Arts, and in association with the French Institute Alliance Française’s annual Crossing the Line 2017 Festival, plus The Metropolitan Museum of Art, NYU Skirball, Dancing in the Streets, 651 Arts, BRIC, University Settlement, the Soul of Brooklyn Festival and the Third Avenue BID. Linyekula will premiere three works: the site-specific “Bantaba [new work],” generated by The Met’s collection of art from the Kingdom of Kongo and the political landscapes and history of the DR Congo; with a group of dancers and actors, the U.S. premiere of “In Search of Dinozord” (“Sur les traces de Dinozord”) “…a poetic, political fairy tale that begins, like all fairytales, with ‘once upon a time…’ as they explore the history of the Congo; and “Festival of Dreams,” in which Linyekula/Studios Kabako (his Kinshasa-based space) brings the community together for two free performances, notes the release. Linyekula will be accompanied by South African dancer Moya Michael on “Bantaba [new work]” and “Festival of Dreams.” For more information, visit www.crossingtheline.org.

Also a part of FIAF’s annual Crossing the Line 2017 Festival, soloist Nora Chipaumire will premiere #PUNK, “… inspired by 1970s independent music, ‘Americana,’ and her own formative years in Zimbabwe in the ’70s-’90s … #PUNK paints a riotous sonic and visual landscape with voice, dance, installation and performance. #PUNK is the first part of a triptych titled #PUNK 100% POP*NIGGA,”a live performance album that confronts and celebrates three sonic ideologies: punk, pop and rumba, explored through the radical artists Patti Smith, Grace Jones and Rit Nzele,” according to the release.  For more information, visit www.crossingtheline.org.

Dorothée Munyaneza premieres “Unwanted” at the Baryshnikov Arts Center. After her New York debut in 2016, where at the Public Theatre’s Under the Radar Festival, she premiered “Samedi Détente,” unearthing childhood memories before fleeing genocide-ridden Rwanda at age 12. In “Unwanted,” “…she continues her examination of the generational wound of genocide and, specifically, the physical and mental repercussions of rape used as an instrument of war.” Munyaneza wrote, “I want to share their testimonies, I want to sing their sorrows and hopes, I want to dance their lives, their scars, their marks, for they leave some behind. We cannot remain indifferent.” For more information, visit www.bacnyc.org.