Introduction to ‘The Defenders’ 101 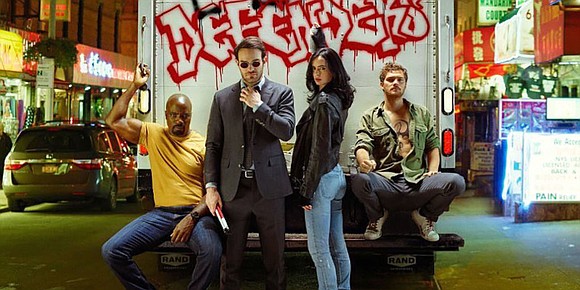 “You four: The Devil of Hell’s Kitchen, the smart-ass detective, the righteous ex-con and the kid with the glowing fist. The war for New York is here…so get your shit together.”

This quote comes from the series “The Defenders,” and works perfectly as an intro to the team Netflix and Marvel have spent the past two years establishing via “Daredevil,” “Jessica Jones,” “Luke Cage” and “Iron Fist” in their respective 13-episode blocks.

First, because there are so many Marvel movies and shows out now, here’s (basically) how “the Marvel Universe” connects: If the entire galaxy’s in danger, call the “Guardians of the Galaxy.” The whole world’s in danger? Call “The Avengers.” The USA? “Agents of SHIELD.” NYC’s in danger? Call “The Defenders.” You’re in danger (from a bully, stalker, gang, mobsters or Illuminati-like mystic ninja horde)? Call a Defender:

The Devil of Hell’s Kitchen

Each Defender has at least one fantastic power and a tale of how it was obtained. Matt Murdock’s power might be the most incredible. He’s a supremely gifted acrobat and fighter who’s blind and compensates via ultra-enhanced other senses. He’s also contradictory: a Catholic and lawyer by day committing devil-garbed vigilante acts by night (and his contradictions have driven away his friends.) Like a Marvel version of Batman, he scares the doo-doo outta most villains. And, like Batman, he utters the words “My city” so often, you’d think he’s Diddy.

I love all the Defenders. But in the Marvel Universe they’re all considered C- or D-listers, whereas Daredevil’s considered a B-lister. He’s the most traditional “super-hero” Defender in that he wears a costume and proactively seeks ways to combat top crime bosses. And both his comic and his Netflix show debuted years before the other Defenders. With that seniority, more Defenders characters and plots connect from “Daredevil” more than from the other shows (with “Iron Fist” a close second).

In the comics, Jessica Jones is the newest and easily the most reluctant “hero” of “The Defenders.” Created in 2001, Jessica first starred in the comic “Alias” (also the name of her detective agency). The Jessica we met there was not a superhero anymore; she’s just trying to live her life after a traumatic event forced her to hang up her costume.

The Netflix version of Jessica carries over the trauma from the comics, but dials her angst up to 11 as she’s drowning in her need to atone. In both versions, she is forced to confront the source of her psychosis, a mind-controlling sociopath named Kilgrave (played with devilish style by former “Dr. Who” lead David Tennant).

After her first season, Jessica is quite uncomfortable with her newfound and unsought celebrity and is disinterested in working with others, let alone as a part of a “team of heroes,” because she doesn’t see herself as one.

Each hero’s Netflix series has a “flavor” or bend. If you like social commentary with your super-heroics, “Luke Cage” is the series to watch. Cage debuted in comics in 1972 as a super-strong, bulletproof “brother trying hard to make it right” after a frame had him locked up for years. Cage lives by a code of personal honor, and events in his show inspired him to make a difference in Harlem. “The Defenders” have some common friends and foes, but Luke and Jessica are the only two with direct history before the new series launches.

The kid with the glowing fist

Debuting for Marvel in 1974, “Iron Fist” tells the story of Danny Rand, heir to a vast fortune whose parents were killed before him during an expedition when he was a child. Taken on by monks from the mystical hidden city of K’un Lun and trained in the martial arts to be their greatest warrior,(…complete with an actual glowing magical “iron fist”), he returns home to New York, intent on using his new skills to avenge his parents’ deaths—but at what cost to K’un Lun?

Danny, played by “Game of Thrones” alum Finn Jones, is a petulant man-child, still overwhelmed with the issues stemming from the death of his parents and reacclimating to the modern world.

There are plenty of other supporting characters and references, but those are your key basics (without spoilers.) It’s beautifully shot, well-paced and fun to watch. Expect R-rated martial arts action, humor, intrigue, romantic entanglement(s) and a reminder of why these characters—while fairly new to TV—have been in print since 1964.

Jermaine Mclaughlin is a 15-year veteran of the comic book industry and a lifelong fan of all things comic book, anime and general geekdom.

L.A. Williams is a former comic editor who runs AquaBabyBooks.com online comic shop. Wisely mention this article to get a free comic with any order made by Aug. 31.