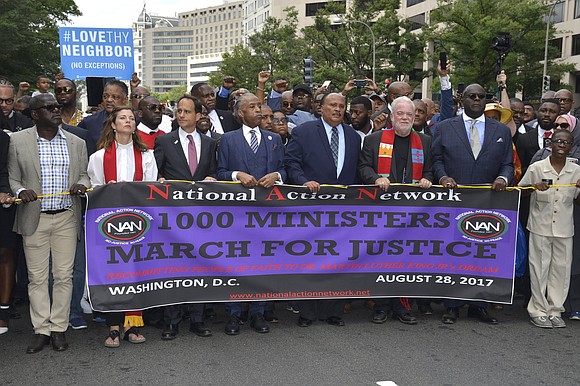 A larger than expected group of marchers, led by the Rev. Al Sharpton, founder and president of the National Action Network, converged on Washington D.C. to protest the policies of President Donald J. Trump on Aug. 28.

The Ministers’ March for Justice occurred on the 54th anniversary of the 1963 March on Washington, where the Rev. Dr. Martin Luther King Jr. delivered his legendary “I Have a Dream” speech. Sharpton said that the event had a special purpose.

“This nation is in moral trouble,” he said. “We have people who want to take health care from their momma because they didn’t like Obama. That is why I have called 1,000 rabbis, sheikhs, imams and Christian ministers to come to Washington.”

The march took place two weeks after the Charlottesville, Va., disturbance in which a woman, Heather Heyer, was allegedly murdered by a white supremacist who used his car to recklessly mow through a group counter-protesting in opposition to a white supremacist rally on Aug. 13. Sharpton indicated that despite the Charlottesville, Va. tragedy, the planning for the Ministers’ March had been taking place for months.

The Rev. Leslie Copeland-Tune, the director of the Ecumenical Poverty Initiative, told a crowd of approximately 5,000 at the pre-march rally that was held near the grounds of the King Memorial on the National Mall, that the Trump conservative agenda is unacceptable.

“No. Hell no. We refuse to go back on the progress that we have made,” Copeland-Tune said. She said that prayer is a potent weapon of protest.

“While we march, we are praying,” she said. “Our prayer is protest against this administration.”

The Rev. Jamal Bryant is the senior pastor of Empowerment Temple AME Church in Baltimore and he spoke at the pre-march rally sporting a San Francisco 49ers jersey of quarterback Colin Kaepernick, who hasn’t signed with a NFL team because of his activism on Black causes. Bryant denounced pro-Trump evangelists Paula White and Jerry Falwell Jr., for characterizing Trump as “God’s Man.”

“We as a nation are rising,” Bryant said. “Donald Trump, we are coming.”

On Pennsylvania, the march proceeded east and stopped for a two-minute prayer in front of the Trump International Hotel. Then they went a block to the northwest entrance of the U.S. Department of Justice.

The actual procession had a touch of the District in it with D.C. Council Member Vincent Gray (D-Ward 7) in the front, with D.C. Statehood Sen. Michael Brown (D) close behind and the Alpha Omega chapter of Omega Psi Phi Fraternity serving as the marshals for the procession.

At the Justice Department, Southern Christian Leadership Conference President the Rev. Charles Steele said his organization wants every state capital to have a statue of King.