Show your love for Sierra Leone! 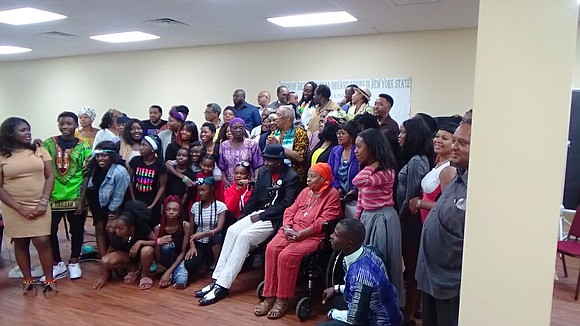 In the wake of the deadly mudslide in Sierra Leone this month, Assemblyman Charles Barron and Operation P.O.W.E.R. organized a community fundraiser in East New York Monday night, Aug. 28, 2017.

Proud of the effort, Barron told the Amsterdam News, “The benefit for the people of Sierra Leone was a tremendous success! The high turn-out and highly spirited crowd of supporters raised over $6,000. We truly showed our love for Sierra Leone. We are an African people!”

Barron said that on August 14, 2017, a devastating mudslide took the lives of more than 450 people in the West African country of Sierra Leone. According to authorities in Sierra Leone, more than 600 people are still missing and more than 3000 people have lost their homes.

“Remember, Sierra Leone was one of the nations that suffered the tragic loss of life during the ‘Ebola crisis’ in 2014 and 2015,” said Barron. “This recent disaster, the mudslide, authorities say caused more death and destruction than the ‘Ebola crisis.’ Yet, the world and the media have not reached the level of sustained focused attention that they have given to the Spain and Virginia tragedies. Is it because we are Africans (Sierra Leone) and the other tragedies occurred to Europeans (Spain and Virginia)? All life is precious and should be respected and protected equally!”

Councilwoman Inez Barron added that in the wake of all the devastation, “Far be it from me to just whine and complain. Let’s do something about it!”

The Barrons sent out a “special thanks to Reverend David Brawley pastor of the St. Paul Community Baptist Church for allowing us to use his church to address this urgent crisis.”