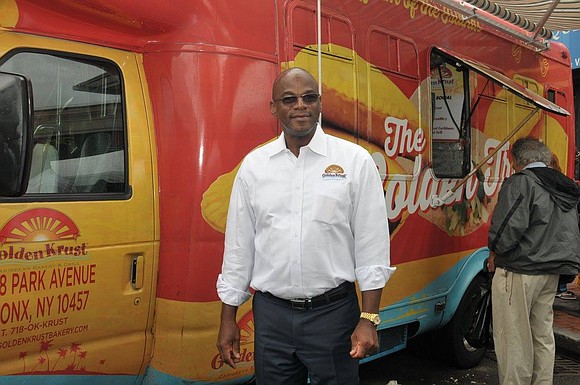 “My condolences to the friends, family and employees of Jamaica-born Lowell Hawthorne, CEO of Golden Krust Caribbean Bakery & Grill,” stated Jamaican Prime Minister Andrew Holness. “He headed the largest Caribbean franchise chain in the U.S., with more than 120 stores.”

The always-about-town, man of the community Hawthorne was found dead Saturday afternoon Dec. 2, 2017, inside his Bronx factory at 3958 Park Ave. in the Bronx’s Claremont neighborhood. According to police, the 57-year-old died of a self-inflicted gunshot wound.

Initially not convinced by reports of a video of the shooting and a suicide letter, social media reflected real-world, real-time conversations of folks who questioned whether the death was suicide. News that there were tax and class-action lawsuits pending did not persuade some friends and observers of the story that Hawthorne would have taken his own life. Almost instantly, though, the police and a variety of media outlets proclaimed his death to be suicide.

In a statement posted on Facebook, Golden Krust announced Hawthorne’s death and thanked those who had contacted them to express condolences.

“The family, management, staff and franchisees of Golden Krust Caribbean Bakery are mourning the untimely passing of Lowell Hawthorne, our founder and CEO, Saturday, Dec. 2, 2017,” read the statement. “Our hearts are broken, and we are struggling to process our grief over this tremendous loss. Lowell was a visionary, entrepreneur, community champion and above all, a committed father, family man, friend and man of faith.”

The statement continued, “To those who have offered us an outpouring of sympathy and love, we say thank you. Your support means the world to us, and we ask you to keep us in your prayers.”

Bronx Council Member Andy King told the Amsterdam News, “I was saddened to hear about the tragic death of Lowell Hawthorne. Over the years, my office and our community have had a great partnership with Golden Krust, its CEO, bakery owners and employees on a number of community events. On behalf of the residents of the 12th Council District, our prayers and condolences go out to Brother Lowell’s family, friends and employees at this very sad and heart-breaking time in their lives.”

“While we all struggle for answers that may never come, we must use this time to lean into the Lord and pray for the Hawthorne family,” said Mount Vernon Mayor Richard Thomas. “Losing Lowell deals a devastating blow to the heart of our business and Caribbean community. The shock of this heavy situation must motivate us to be mindful of each other’s well-being [especially during the holiday season] and prepare us to do more to uplift each other. This tragedy is the latest test to our faith in the future, and my [advice] to the Hawthorne family and all those impacted is to hold on to hope.  Mount Vernon will be there for you and with you as we work to find the way forward through this dark moment.”

“It was a shocking surprise to learn of the loss of Lowell Hawthorne,” said Assembly Member Michael Blake. “Our team is sending his family and the entire Golden Krust team love, prayers and strength. Golden Krust is a hallmark in our community, located in our assembly district and employs hundreds of our residents. I’ve had the honor of collaborating and spending time with the Hawthorne family, a pillar in the minority and women business enterprises space, and who regularly provides community support.

“One never fully knows what someone is going through, so please take this moment to check on your loved ones, friends and colleagues as we don’t know the pain the Hawthorne family is experiencing right now. As a Jamaican American, I send my heartfelt blessings to his family. From our family to his own: Walk good, Mr. Hawthorne.”

Freelance photographer and friend of the Hawthorne family Margot Jordan told the Amsterdam News as she poured through hundreds of photographs for the paper, “All I know about Lowell is love. He was contributed so much to the community—from the Bronx to throughout this country and the Caribbean. He was always giving of himself to his family, his friends and his international community. He was love.”

Council Member I. Daneek Miller said, “We are at a loss to conceive the notion that Lowell Hawthorne, the baker’s son from the Jamaican hilltop community of Border, whose culinary gifts and can-do spirit gave birth to a surging restaurant and food retail enterprise that employs several hundred people in locations across America, is now gone to us. Since its creation, Golden Krust has always been more than a franchise. It is both an expression of cultural pride and devotion to community. I wish to extend my condolences to the Hawthorne family for the sudden and untimely passing of their beloved Lowell. We will not soon forget the many contributions of the man who took the taste of the Caribbean to the world.”

“Brooklyn mourns the tragic loss of Lowell Hawthorne, founder and CEO of Golden Krust Caribbean Bakery & Grill and a true icon in our Caribbean-American community,” said Brooklyn Borough President Eric Adams. “Lowell was a friend to me and tens of thousands of New Yorkers, serving as an inspiration to entrepreneurs of color in the example of his own immigrant story. Through the humble Jamaican patty, he introduced Caribbean culture to people across America. I send my support to Lowell’s family at this difficult time.

“As we try to comprehend this painful loss, we reflect on the importance of community and support networks to help handle life’s difficult challenges. In this holiday season, which can be a silent struggle for many among us, I ask those in need to reach out and speak out if and when they have personal pain, including by calling 888-NYC-WELL for free, confidential assistance. None of us are alone.”

The community will have a chance to pay their respects Saturday, Dec. 9. A candlelight vigil will be held at the first Golden Krust store at 1381 E. Gun Hill Rd. in the Bronx from 1 p.m. to 9 p.m.

A representative for Golden Krust told the Amsterdam News that Saturday’s event would help the community come together and mourn Hawthorne’s death while also celebrating his life.

“He was a very active member of the community,” the representative said. “Giving to local churches, small businesses, big businesses ... everyone knew him. People have been calling the radio station crying. People have called me crying.”

The radio station in question is 93.5 WVIP, which will broadcast the candlelight vigil from 1 p.m. to 6 p.m. The lighting of candles will take place sometime after the broadcast.

Hawthorne founded Golden Krust in 1989, when he, his wife and his siblings and their spouses pooled all of their resources to open the first store. By 1996, it had become the first Caribbean-owned business in the United States to obtain a franchise license. The company currently operates a chain of more than 100 restaurants in nine states.

Speaking from Florida, fellow Jamaican Eddy Edwards of Riddims Marketing, Inc. told the Amsterdam News that he knew Hawthorne and was stunned by the news, “It is a traffic loss for our Caribbean communities in the U.S. His story inspired many and he was a shining example of a successful immigrant making a positive and valuable contribution to the economic and social landscapes.”

Gramby’s Funeral Home has made the following announcement: