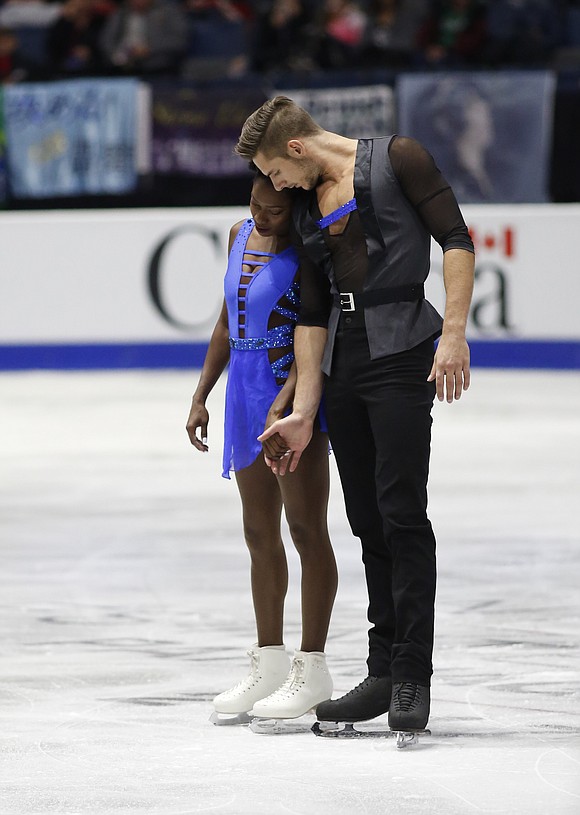 It has been an outstanding autumn for French pairs champions Vanessa James and Morgan Ciprès. They finished third at Skate Canada and second at Internationaux de France (winning the free skate). A bit disappointed they didn’t qualify for the Grand Prix Final this weekend in Nagoya, Japan (short by two points), they’re using the time to fine-tune their programs with their choreographer, John Kerr.

“I’m very proud of what we’ve done,” said James. “We’ve done four clean programs [short and long] at two big competitions. The confidence and the results are there.”

They definitely need to work on details in their programs—trying to maximize the possible points under skating’s international judging system. They also want to improve their finesse, skating skills and emotion.

“We have time to improve, watch our videos and be on top of things for Europeans [in January],” said James. “The French Championships [next week] will be the time to try the new elements out and solidify them before Europeans.”

Of course, James and Ciprès hope the absolute highlight of this season will be the Olympic Winter Games in PyeongChang. It will be their second as a team and James’ third. They expect to be nervous, but they’re ready.

Figure skating is often viewed as a sport for youngsters, but James enjoys that she’s coming into her power at age 30. It’s testament to the excellent coaches with whom they began training in June 2016.

“Some of the older skaters are doing the most risky elements,” said James, who performs a quadruple throw jump with Ciprès. “It’s something to be very proud of.”

James takes care of her body and also helps Ciprès by making sure he’s eating healthy food. She brings his lunch to the rink along with her own. They live in the same apartment building, and she prepares dinner most nights, saying he’d largely subsist on cereal if she didn’t take matters into her hands.

Knowing there are not a lot of Black winter Olympians, she’s excited to meet others, such as the Nigerian women’s bobsled team that recently qualified. It will probably be James’ last Olympics, and she and Ciprès are doing their utmost to make it memorable.

“I feel God had a mission for us and we had to get to a certain point,” she said. “He made us stronger later in our career. I couldn’t ask for better timing.”