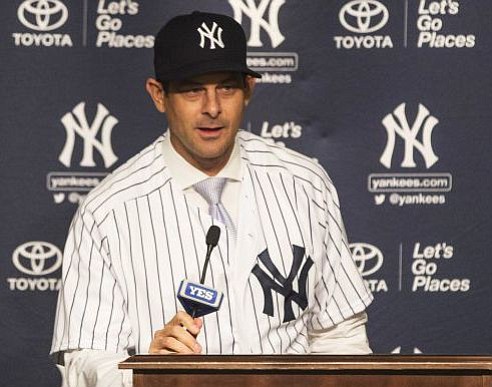 Aaron Boone, who hit one of the greatest, most historic postseason home runs in baseball history as a New York Yankee against their most noted rival, the Boston Red Sox, to win the 2003 American League Championship, was hired Monday and officially introduced yesterday (Wednesday) at a noon  news conference at Yankee Stadium as the team’s new manager.

Boone, 44, a former third baseman, now a rookie manager, spent the last nine years as an ESPN baseball analyst after retiring as a player. He now leads the team that former manager Joe Girardi helmed for the past 10 years until last month when the Yankees didn’t extend his contract.

Girardi, 53, won a World Series for the Yanks in 2009, a 103-win regular season, defeating the Philadelphia Phillies in six games. He’s credited with taking this year’s Yankee team to the American League Championship, the ALCS, losing to the Houston Astros in seven games. Houston went on to the next round to win the World Series, their first. Looking back, it was a close series that the Yankees possibly could have won, considering that they lost the first two games of the series 2-1. The team was projected to be good but not expected to go as far as they did. Under Girardi they overachieved, winning 91 regular season games. As the Yankee’s skipper, Girardi compiled a 910-win and a 710-loss record during his time there.

Boone signed a three-year deal Monday with New York that includes a team option for 2021. With no experience at any level, Boone will be learning on the job in the media capital of the world, with one of the most demanding fan bases in baseball. It’s known that Yankee fans expect to go to the playoffs every year. Overall, they’ve won 27 World Series and 40 American League Pennants, the most of any of the Major League Baseball teams.

Boone was one of six candidates allowed to interview for the managerial position. “When we had the opportunity to speak with Aaron and share concepts and ideas, he was able to showcase a variety of traits that we believe will strongly benefit this franchise as we move forward, including an astute mind for the game and a progressive approach to evolving strategies,” said Brian Cashman, the Yankees’ general manager, about Boone who unanimously impressed all of the front office executives involved in the interview process.

“We also believe Aaron’s interpersonal skills and baseball pedigree will allow him to blend well with the systems we have in place, our baseball operations staff and the 25-man roster,” said Cashman.

The Yankees managing general partner, Hal Steinbrenner, reluctant to hiring an inexperienced manager before the interview process began, signed off on Boone’s hire.

“I firmly believe that Aaron possesses the attributes needed to follow in the tradition of great Yankees managers,” Steinbrenner said in a prepared statement. “From all accounts, he is a polished communicator who possesses the ability to cultivate and grow relationships. Aaron has also spent a lifetime immersed in baseball, affording him a unique and intimate understanding of what fosters team success. Aaron’s name is already etched into Yankees history, and my family and I are excited to welcome him back to this franchise.”