Sharpton and CBC meet with Libyans about slavery 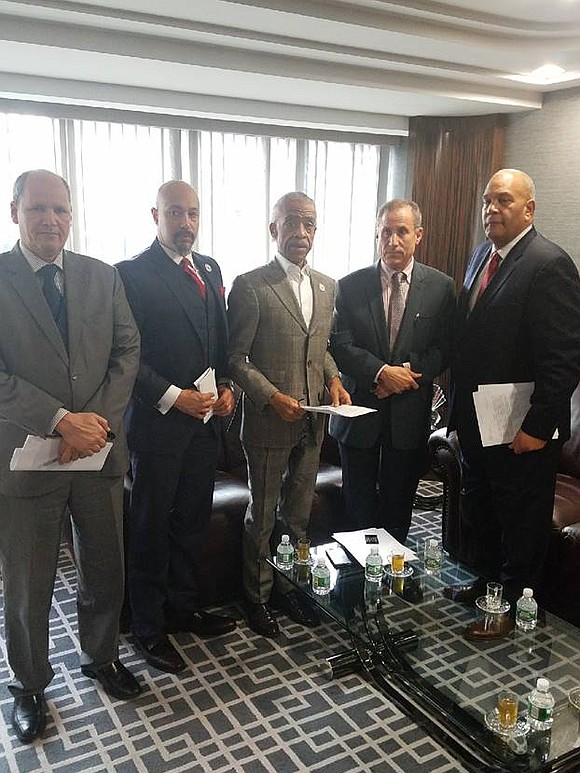 Various groups held an anti-slavery march Dec. 11 in Washington, D.C., to protest against slave auctions in Libya. The issue was first reported by CNN via a video in early November.

A press release stated that demonstrators would demand that all African leaders immediately repatriate migrants held captive and for the Libyan government to close the remaining detention camps and release migrants to the United Nations High Commissioner for Refugees.

The press release also states that the demonstrators demanded that the U.N., European Union and African Union protect the human rights of migrants and enforce the rule of law during legal migration in the form of increased resettlement, humanitarian visas and sponsorship programs.

Members of the Congressional Black Caucus held a closed-door meeting with Libyan Ambassador Wafa Bughaighis to discuss the CNN report. According to reports, the meeting was a follow-up to a letter sent to the ambassador demanding an immediate investigation into the existence of the slave auctions and reports of forced labor.

“We met with the ambassador out of the profound concern that in this day and age, people are being sold as property,” said Congress Member Karen Bass (D-CA), CBC Foreign Affairs and National Security Task Force co-chair. “The international community must operate on the assumption that we don’t need further proof, what we need is to stop it. The ambassador has agreed to provide us a detailed update on the specifics of the Libyan investigation and will continue to work with us transparently to respond to the migrant and refugee situation. I look forward to the much-needed progress on this issue.”

Bass introduced a resolution that calls on the Trump administration to develop strategies to rapidly respond to the migrant and refugee situation in Libya. “Congress cannot sit idly by as news of the Libya slave trade spreads,” said Bass, top Democrat on the House Subcommittee on Africa. “Slavery is a crime against humanity. This resolution calls for a comprehensive response both domestically and internationally, to this report, which is what we’ll need going forward to take an effective stand against this tragedy.”

The bill has been cosponsored by a bipartisan coalition of 40 members of Congress.

On Dec. 6, the Rev. Al Sharpton met with the Libya’s U.N. ambassador, Elmahdi Elmajerbi, to gain approval to lead a fact-finding mission to Libya before Christmas with prominent clergy. Sharpton stated via a press release, “It is morally reprehensible that the world has ignored the existence of slavery.”

A representative for Sharpton emailed the AmNews to say that NAN is assessing logistics and staffing and has nothing else to report.

On Nov. 28, Fairness and Accuracy in Reporting charged that the American and British media have largely ignored the role of the North Atlantic Treaty Organization in bringing slavery to the North African nation. “NATO supported an array of rebel groups fighting on the ground in Libya, many of which were dominated by Islamist extremists who harbored violently racist views,” according to FAIR.

FAIR continued, “Moreover, even the few news reports that do acknowledge NATO’s complicity in the chaos in Libya do not go a step further and detail the well-documented, violent racism of the NATO-backed Libyan rebels who ushered in slavery after ethnically cleansing and committing brutal crimes against Black Libyans.”