Hofstra performs valiantly in the face of injuries 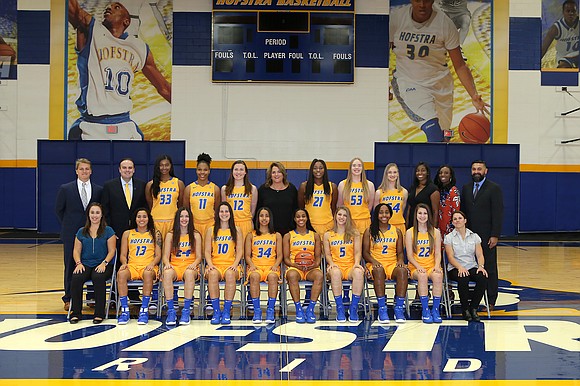 It has been a rough opening to the 2017-18 season for Hofstra University women’s basketball. The Pride has been beset by injuries—at times only suiting up seven people for a game—and finals break couldn’t come fast enough for coach Krista Kilburn-Steveskey.

Although the team is currently 5-5 to start the season, Kilburn-Steveskey is upbeat and relieved that the sidelined players finally seem to be turning a corner. Starting with tonight’s game against St. Bonaventure University, she hopes nine or 10 players are ready for action.

“We’re going to feel really good because our future looks very bright,” said Kilburn-Steveskey. “We had to push through and get better, which I thought we did during this nonconference slate with our numbers being so low.”

Admittedly, it has been a stressful few weeks for Kilburn-Steveskey. Up until game time against Siena College on Dec. 4, she thought there might only be five healthy players and one somewhat injured player ready to play. Through it all, the players pushed through and showed team spirit, and the coaching staff never gave up.

“This is what athletics teaches you,” said Kilburn-Steveskey. “You can’t control people getting hurt and some situations. You just have to go out and do your best. As coaching staff, we’ve just got to plug through and go with what we’ve got. We got creative, whether it was playing zone or trying to press.

“I’m very proud of my team enduring during this time,” she added. “We can be .500 to start conference. It’s not how we start; it’s how we finish.”

The upside is freshmen and reserves getting some significant minutes and becoming stronger.

The team’s leading scorer, senior forward Ashunae Durant, who was averaging near a double-double in the first nine games before rolling her ankle, should be back in action. Ana Hernandez Gil is still day-to-day. Local girl, guard Lauren “Boogie” Brozoski from Queens, who is a transfer, will make her debut shortly as will fellow transfer, post player Mikiyah Croskey.

“The theme that brings them together is they love basketball,” she said. “They click. They love to play. They want to succeed.”