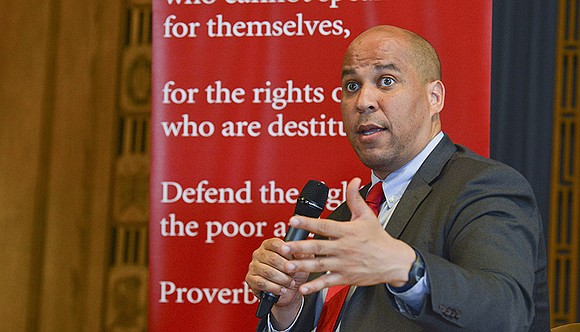 The police presence at the Newark home of U.S. Sen. Cory Booker was stepped up after the Democratic politician was on the receiving end of a death threat.

Reports indicate that no details have been released on the threat that was made to Booker and his family. However, it is suggested that the threat might have something to do with Booker’s recent campaigning with fellow Democrat U.S. Sen.-elect Doug Jones of Alabama. The U.S. Capitol Police contacted the Newark Police Department about the threat.

“The Newark Police Division has been notified by the United States Capitol Police regarding a threat on the life of New Jersey Senator Cory Booker and his family members,” Mayor Ras Baraka said. “As a result, members of the Police Division’s Executive Protection Unit have been assigned to provide security at the Senator’s residence in Newark. The security detail will have no impact on police services.” Baraka added that the USCP provides protection to members of Congress and that his team is closely coordinating with the agency to ensure Booker is able to carry out his duties of serving New Jersey’s residents in Congress in a safe manner.

Booker has been one of the most vocal critics of President Donald Trump and his administration since his election. Earlier this month, at a campaign event for Jones, Booker called on Trump to resign over sexual misconduct allegations against him.

“I just watched Al Franken do the honorable thing and resign,” Booker said. “My question is why isn’t Donald Trump doing the same thing? Who has more serious allegations against him, with more women who have come forward?”

Last week, Booker sent letters to both Thomas Farr, nominee to be a judge for the Eastern District of North Carolina, and Attorney General Jeff Sessions seeking an explanation for apparent discrepancies between Farr’s written testimony to the Senate Judiciary Committee and his apparent awareness of major voter suppression.