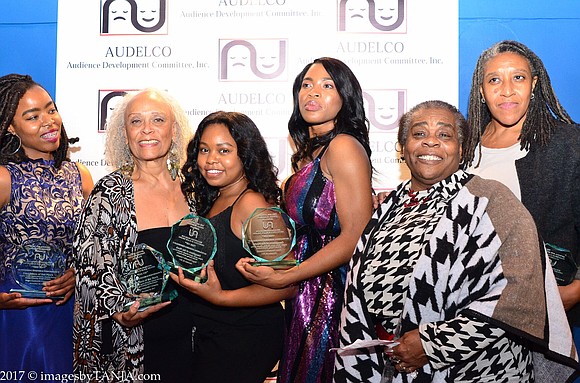 Oh, what a night! The 45th annual AUDELCO “VIV” Awards recognizing excellence in Black theater was fabulous at Symphony Space Monday, Nov. 20. It was a Black theater family reunion of the highest quality, and you could feel the love and friendship in the room. Have you ever been somewhere, and you felt comfortable, warm, loved and appreciated? Well, that’s what it feels like to attend the Vivian Robinson AUDELCO Recognition Awards.

This year’s theme was “Making History—Black Joy.” It was a Sapphire Jubilee celebrating a 45-year legacy. This year was by far one of the most memorable AUDELCOs that I have attended. The mood was one of friends getting together to celebrate each other, and it was a marvelous event. The evening was hosted by Brenda Braxton and George Faison, and they were wonderful and very funny at the podium.

Out of 20 categories, the big winner of the night was “Autumn,” which came away with six AUDELCO Awards, dubbed the VIV in honor of one of AUDELCO’s founders, Vivian Robinson. “Autumn,” a play from the Billie Holiday Theatre in Brooklyn, won for Dramatic Production of the Year; Playwright—Richard Wesley; Director/Dramatic Production—Walter Dallas; Lead Actor—Jerome Preston Bates; Supporting Actress—Pauletta Washington; and Supporting Actor—Count Stovall. I had the pleasure of seeing “Autumn” when it played at the Kumble Theater and it was brilliant. When asked about the recognition “Autumn” received, Wesley said, “We won in every category we were nominated in. I feel incredibly humble. This is the first full-length play I’ve written in 20 years and to come back like this.”

It was also interesting to see that when Wesley’s name was called for winning in the playwright category, the entire cast came onstage with him. Wesley explained, “I wanted to bring as many cast members on the stage as possible. No playwright can do this without such a tremendous amount of talent and pose.”

Norm Lewis, who starred in “Sweeney Todd,” won Outstanding Performance in a Musical, Male. Darius Smith received Outstanding Musical Director for “Raisin.” “Daughters of the Mock” from the Negro Ensemble Company won for Outstanding Ensemble Performance. Timothy Simonson won Solo Performance for “Adam.” Elizabeth Van Dyke came away with Lead Actress for her starring role in “Zora Neale Hurston,” a New Federal Theatre production. Van Dyke became very emotional onstage and shared, “In 2008, my mother had a stroke and I’m her only child. I gave up acting. In 1991 I played Zora with Timothy Johnston. Fast forward 25 years, I didn’t think I’d be acting at all. To be onstage in any shape or form and to have my work recognized in this way is just extraordinary. Thank you, Grace Jones, who was with me every step of the way with my mother. Thank you, Woodie King, who believes in me and New Federal Theatre.”

The VIV for Best Revival went to Black Spectrum Theatre Company in Queens for its production of “Two Trains Running,” an August Wilson play.

There were many incredible people honored this year at AUDELCO’s 45th. Hair and makeup designer with Broadway credits for “The Phantom of the Opera,” and other productions to her name, in addition to movies and television, Thelma Pollard received a Special Pioneer Award, which was presented by Broadway producer Chapman Roberts. Playwright Ishmael Reed was presented with a Special Pioneer Award by Rome Neal of the Nuyorican Poets Café, where many of his plays have been performed. In recognition of the phenomenal, powerful work of two female playwrights who have bought many important issues to the stage and did so brilliantly, playwrights Dominique Morisseau and Lynn Nottage received Outstanding Achievement awards. I personally was honored to present Pulitzer Prize- winning playwright Nottage with her award. AUDELCO board member, producer and founder of McDonald’s Gospelfest, A. Curtis Farrow, was given a special achievement award; AUDELCO board member, actor and director Dale R. Shields was presented with a Special Achievement Award and was joined onstage by longtime friend and Tony Award-winning actor and AUDELCO co-chair, Chuck Cooper. The amazing couple Camille Billops and James Hatch received the Board of Directors Award for their contributions to the arts. Billops is a poet, sculpture, jewelry maker, book illustrator and filmmaker. They founded the Hatch-Billops Collection, an archive of African-American cultural history. They have made award-winning documentaries. John D. Smith, a constant supporter of the arts, received the Board of Directors Award. Former board of directors member Fred Powell was remembered by AUDELCO President Grace Jones with a candle lighting ceremony onstage, surrounded by the AUDELCO board of directors. Jones got teary eyed as she remembered her good friend, and she thanked his family for all he did for AUDELCO.

Each year AUDELCO recognizes the great talent of a newcomer to the stage with the Rising Star Award, this year, Jordan Tyson won for her starring role in “Sweetee.” Tyson was very humble as she accepted this recognition.

August Wilson’s “Jitney” was honored at the AUDELCO Awards. This production coming to Broadway meant that all of August Wilson’s plays in his 10-play cycle made it to Broadway. “Jitney” won the Tony for Best Revival this year. AUDELCO created the “Jitney Award” in its honor and the recipient was Ruben Santiago-Hudson, the man who fought for 10 years to get “Jitney” on Broadway. Manhattan Theatre Club produced “Jitney” and many of August Wilson’s plays, and its executive producer, Barry Grove, accepted the award for Santiago-Hudson, who couldn’t be there. He was also joined onstage by August Wilson actor Cooper. I presented this award and requested that any person in the audience who had appeared in an August Wilson play stand and accept applause. The theater was full of thespians on their feet. It was a site that warmed the soul. Grove went on to share something very touching. “August Wilson on his deathbed made Ruben promise he would get Jitney to Broadway,” he said. “I’m so glad he came to Lynn Meadows.”

What you realize when you go to the AUDELCOs is that there is so much incredible, powerful Black talent that needs to be supported and nurtured. We must believe in and support each other. We must believe in and support AUDELCO, which is acknowledging the greatest talents in Black theater. Join AUDELCO and find out what you can do to support our people onstage. Visit AUDELCO, Audience Development Committee, Inc.