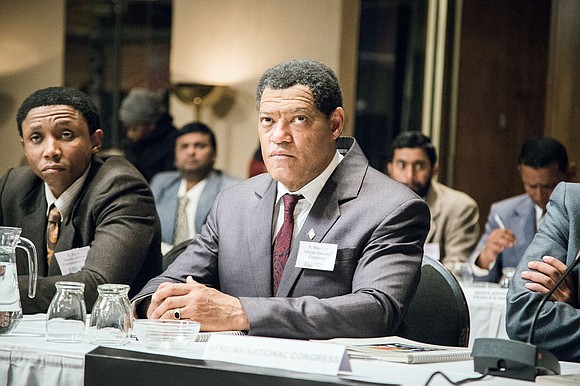 In many ways an old-fashioned miniseries, "Madiba" (a term of reverence used in reference to Mandela) spans decades, dutifully beginning with Mandela's youth and his father's dying wish that he be educated. The story progresses through his rise to lead the African National Congress, imprisonment and eventual release, triumphing against the system that oppressed him.

Airing in two-hour installments, and directed by Kevin Hooks, "Madiba" also pulls the curtain back on the period's South African politics, including assassinations and other tumult that almost invariably resulted in harsher crackdowns on the black population.

"We need to put these people in their place," one Prime Minister advocates, determined to crush the equality movement by arresting i5w leaders. That eventually leads to Mandela's incarceration, spending a torturous 27 years in prison, where he maintained his defiance and dignity, as well as a magnanimous spirit toward his jailers.

Mandela is joined in these efforts by Oliver Tambo (Orlando Jones) and Walter Sisulu ("Supergirl's" David Harewood). As the project makes painfully clear, he paid a terrible personal price in terms of his family and relationships, including the ruthless tactics employed by his wife Winnie (Terry Pheto), which eventually destroyed the marriage.

Fishburne brings understated strength to the role that humanizes this iconic figure of resistance to injustice. Given where "Madiba" ends, it also serves as a pretty logical companion to "Invictus," the 2009 movie that cast Morgan Freeman as Mandela during a key moment in his presidency.

Filmed in South Africa, from a script based on two Mandela autobiographies, "Madiba" covers a great deal of ground. Perhaps inevitably, that makes the story disjointed in places, as it shifts from Mandela's claustrophobic confinement to the government violently tamping down protests to the emergence of new leaders like Steve Biko.

Ultimately, though, "Madiba" is inspiring and ambitious in both its casting and subject matter -- a historical drama that once would have landed on a major network and represents a welcome venture for BET.

"Great anger and bitterness never built anything," Mandela says late in the story. "Least of all a nation."

After this sobering reminder of the bitter suffering he and his countrymen endured, it's a sentiment that's as powerful as it is timely.

"Madiba" premieres February 1 at 8 p.m. on BET and will continue the next two Wednesdays.