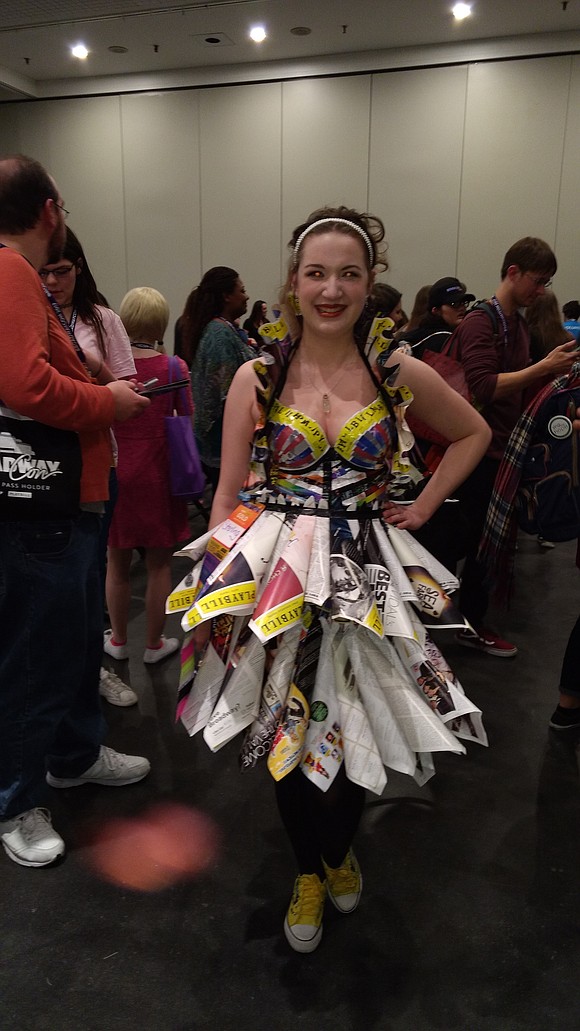 This fan dressed the part as Playbills adorned her body. Linda Armstrong photo

BroadwayCon at the Jacob K. Javits Convention Center this past weekend was the best it gets for theater lovers. The Convention Center on 38th Street and 11th Avenue was the place to get your fill of theater during the second annual BroadwayCon. A throng of people, young and old of all races and ethnic backgrounds, converged on the Convention Center. The common denominator was their overwhelming love and appreciation of Broadway shows and they definitely left satisfied.

BroadwayCon, which is produced by Mischief Management and Playbill, had 500 celebrity guests, 200 hours of programming and 60 marketplace vendors and exhibits. The public got to perform, discuss and debate theater. There were panels, performances, interviews, workshops and more.

This weekend was my first time at BroadwayCon, and the event was one I’ll never forget. There were singalongs in which total strangers sang the now all-too-well-known songs from Lin Manuel Miranda’s “Hamilton.” Other singalongs included songs from “Grease” and “Hairspray.” There were booths at which one could buy original plays, both classic and new, T-shirts and other items from Broadway shows. Costumes sketches, scenic sketches, all types of items associated with the making of Broadway shows were up for sale. The Professional Children’s School, which takes students in grades 6 to 12, was there with information for those interested in enrolling.

Live groups performed songs from Broadway shows such as “Phantom of the Opera.” Fans came by the droves, some in full costume from head to toe. Many wore customers from “Hamilton” and jumped at the chance to participate in a Hamilton singalong.

For three days, BroadwayCon delivered the stars to the public. It was a regular who’s who from Chita Rivera to LaChanze to Whoopi Goldberg and so many, many more. You should visit www.broadwaycon.com and see a listing of the stars, playwrights, technical people and theater critics who took part in workshops and panel discussions. I can proudly say I was one of them. Saturday, I participated in a panel called “Everyone’s a Critic.”

There was never a dull moment. Either you could shop, be entertained, participate in a full, energy-filled meet-up where you focused on one production and sang songs from it, or you could take a choreography workshop, make-up workshop or costume workshop. All facets of Broadway theater were delved into and shared in a public-friendly way.

The performers who were there were also happy to sign autographs and take photos with fans. It was a must for Broadway lovers. It was so wonderful to witness the mix of people who attended and to experience the unbridled enthusiasm and dedication that people have for theater. BroadwayCon is definitely something to plan to experience next year. Busloads of teenagers came to experience first-hand the elements of the Broadway shows they obviously love and that was inspiring to see and hear.