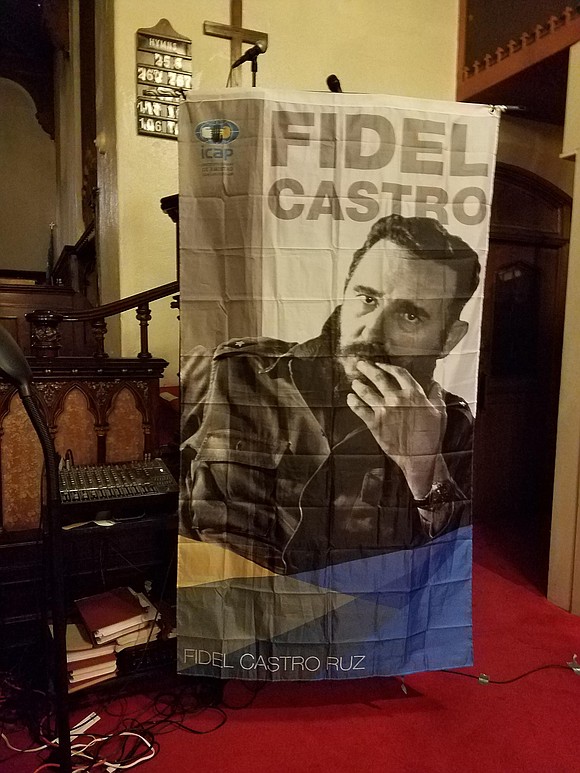 Feb. 4, New Yorkers will gather at the Malcolm X/Dr. Betty Shabazz Memorial and Educational Center, located in Upper Manhattan, at 7 p.m. The memorial tribute is sponsored by the NY/NJ Cuba Si’ Committee.

“It is profoundly fitting that we memorialize this great man [Castro] where Malcolm X rallied our people and where he ultimately sacrificed his life,” said Zayid Muhammad, people’s artist and press officer for the Malcolm X Commemoration Committee in a press release.

Castro, who will go down in history as one of the most important revolutionaries of the modern era, died at 90 on Nov. 25, 2016.

According to sources, it was touch-and-go for weeks as activists attempted to find a venue in Harlem that would accommodate the crowd expected to attend the memorial. Gail Walker, executive director IFCO/Pastors for Peace, shared an email discussion with the Church of the Intercession and revered activist, Father Luis Barrios, Ph.D., BCFE, a professor at the John Jay College of Criminal Justice and member of Ph.D. faculties in critical social/personality psychology, Graduate Center, City University of New York.

The email, dated Dec. 15, 2016, from the Rev. Rhonda J. Robinson, priest-in-charge, Church of the Intercession, said, “I am sorry but after careful consideration we are declining the request. Fidel Castro is a divisive figure, considered by some to be a hero and others to be a war criminal. As Castro was not an important figure to the church, we do not see the need to place ourselves into what is essentially a political debate about his legacy by hosting a service in his memory.”

“I am very sorry that the decision has been not to allow this moment of worship, reflection and healing, three realities to which the church is called to respond to the people,” stated Barrios in his response, also by email.

Referring to the emails, Walker said, “I proudly share it with you [AmNews] because it’s important to push back when people rely on lies and distortions to maintain a wrong-headed position.”

Walker said that Riverside Church offered the organizing committee their church for a $3,000 fee for two hours.

“I am not giving the institution of the church a free ticket, that is why I push-back,” stated Barrios. “I still have a lot of hope that something can come out of the church in the direction of liberation, not oppression.” The reality is the church must be holistic in political, economic and a religious prospective, Barrios added.

“Whenever Fidel [Castro] had come to Harlem, all he had did was electrify people to do for themselves,” said Muhammad. He noted the importance of this generation understanding the importance of Castro meeting with Malcolm X at Harlem’s Hotel Theresa in September 1960. “Malcolm X invited Fidel [Castro] to stay there in Harlem when the city administration and hotels in Lower Manhattan were hostile to the young socialist leader,” said Muhammad.

That landmark moment, chronicled in Rosemari Mealy’s book, “Memories of a Meeting: Fidel Meets Malcolm X,” cemented a bond of solidarity between Blacks, progressive New Yorkers and the Cuban Revolution at the height of the Cold War, something the Cuban people have always been deeply appreciative of, Muhammad stressed.

“Fidel [Castro] came back to Harlem to speak at Abyssinian Baptist Church in 1995 and at Riverside Church in 2000,” Muhammad said.

Representatives from several U.N. Missions are expected to attend the event. Cuba’s new United Nations Ambassador Anayansi Rodriguez will be giving the keynote address, her first to a New York audience.

Zenzile Khoisan from South Africa and Frank Velgara of Pro Libertad will also do poetic tributes. U.S. graduates of ELAM, Cuba’s international Latin American Medical School, will also express their gratitude. A moving video tribute to Castro will close out this amazing evening.