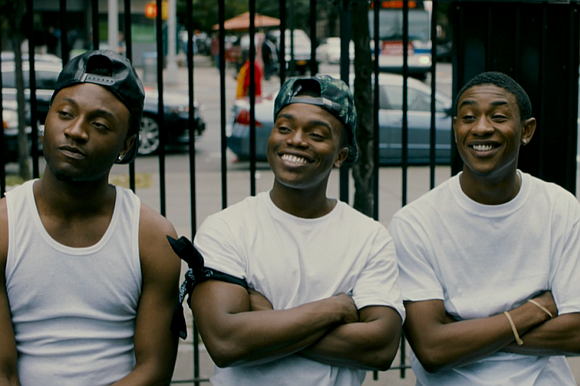 The theme of the drama is familiar and from the very first frame, viewers will understand that this film is a powerful story wrapped so tightly in truth it feels as if someone snuck into their memories and decided to edit them neatly—chapter and verse—into the film. We float into act one, scene one and from this point of view, we might feel that the ending is tragic, almost pointless, but just like Harlem and its dwellers, nothing is really as it appears.

Setting the picture, it’s a rainy night in Harlem and you can almost hear the life essence of those who came before lingering in the air. A dark, well-toned man sits silently on a bodega milk cart, drawing in the cancerous smoke of yet another cigarette and he’s waiting. What he’s waiting for, the ever present police car, is not long in coming. We hear his voice-over, he introduces himself simply as L, short for Lance, quickly stating that we should “Check with your crew. Find out who I am.” Remember what appears so clear on first glance changes with the complexity of a prism, and to this, “Chapter & Verse” gives the viewer a lot to gawk at.

Beaty gives an even performance as Lance, an ex-convict re-entering society, breathing authenticity into the role. Now, we know Lance is a man with some street credibility, one of the strongest survivors of the wild humankind, and in being released he’s stewing in frustration because he fails to find work repairing computers. Imagine a walk in his shoes. He spouts the facts early. “I got two computer certificates” he tells his white halfway-house officer, whose response is far from sympathetic. It is, in fact, stereotypical and atypical as he quips, “I took piano lessons. You don’t see [me] at Carnegie Hall.”

Qualified in the American system rarely results in justice, so Lance finds employment at the local community food-delivery service, and during a mishap delivery becomes friendly with Miss Maddy (Loretta Devine), whose artistically talented but misguided grandson Ty (Khadim Diop) is involved with the kind of gang business that got Lance incarnated in the first place.

The cinematic tone is mixed, giving a feeling that we’ve slipped into a familiar time loop—backward—where imperfections will reveal the best and most needed life lessons. The story unfolds and the characters speak dialogue that propels the story—quickly—toward a troublesome end, which, like life, presents a swath just wide enough to offer hope.