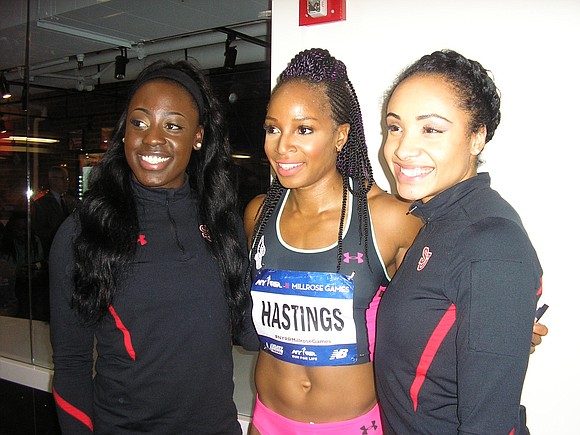 NYC native Natasha Hastings returns to Millrose Games. She is shown here with runners from St. Johns University after her 2016 victory. Lois Elfman

“I’ve heard the track is fast and the crowd is really engaged in the track meet, so I’m really looking forward to it,” said first-time Millrose Games participant Ashley Spencer, Olympic bronze medalist in the 400-meter hurdles. “Win, lose or draw, when you have that many talented ladies … it should be fun.”

Spencer is one of several medalists from the 2016 Olympic Games in Rio who are scheduled to compete at the Millrose Games, which are being held at the New Balance Track & Field Center at the Armory Saturday. Local names include gold medalists Dalilah Muhammad from Queens, the first American woman to win the 400-meter hurdles and Natasha Hastings, who grew up in Brooklyn and Queens and went to high school in Harlem, a member of the women’s 4x400 relay team. Also expected are Olympic 400-meter gold medalist Shaunae Miller from the Bahamas and Morolake Akinosun from the U.S. gold medal 4x100 relay.

“I’m looking forward to the entire experience,” said Akinosun, who grew up watching Millrose Games on television. “[I’m going] from being on the outside watching the meet to actually being a part of the meet and feeling the Adrenalin rush of the crowd.”

This year’s Millrose Games won’t feature the traditional 400 meters. Instead, Hastings, Miller and Spencer will face off in the 300 meters and Muhammad will run the 500. First-timer Akinosun will be in the 60 meters. Also, in the 60 will be veteran sprinter Miki Barber from New Jersey. She and twin sister Me’Lisa Barber have run at the Armory since high school and have been Millrose regulars since college.

“It feels special to me,” said Barber. “This is probably going to be my last Millrose Games. I want to come and do a great job. The energy in the New York meets is totally different from any other place. They show love there.

“I’m ready,” she added. “I made sure I got myself into tip-top shape. For me as a veteran runner, just to be back on the lineup again shows I’m still here, relevant and ready to run.”

Akinosun and Spencer promised to bring some glamour along with fast times. “I can guarantee you’ll see some special New York City nails,” said Akinosun. “My thing is nails,” said Spencer. “If nothing else, my nails will be done.”