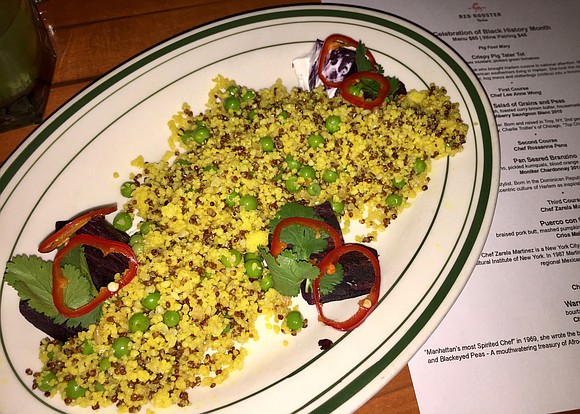 It is that time of year again when the African-American experience is highlighted by the nation. Although there are infinite ways to recognize this history on the other 337 days of the year, these 28 days continue to be a humbling reminder of all that has been accomplished.

Chef restaurateur of Harlem’s Red Rooster, Marcus Samuelsson, and his talented team of chefs are honoring Black History Month by putting together a pre-fixe menu of dishes created by or inspired by female chefs of color. Samuelsson wanted to open the discussion up to women of various backgrounds who are underrepresented in the culinary industry.

Here is the full menu with some history of the muse of each dish:

Lillian Harris Dean (1870-1929) was an African-American cook who brought Harlem cuisine to national attention. Migrating to New York from Mississippi, she became a successful entrepreneur catering to African-American southerners living in Harlem. She took the name Pig Foot Mary because she turned traditional foods such as pigs’ feet, hog maws and chitterlings (chitlins) into a thriving business.

Warm Salad of Grains and Peas

Chef Lee Anne Wong is a modern global-fusion cuisine master. Born and raised in Troy, N.Y., she is a second-generation Chinese-American and an FCI graduate. She has worked in Aquavit/Jean-Georges Vongerichten’s restaurant 66, French Laundry, and Charlie Trotter’s of Chicago. She was a “Top Chef” cheftestant and is a culinary producer.

Chef Rossanne Pena is Red Rooster’s own sous chef and food stylist. Born in the Dominican Republic and raised in NYC, she uses her Afro-Latina roots with the eccentric culture of Harlem as inspiration for her dishes.

Born in Agua Prieta, Mexico, Zarela Martinez is a New York City-based restaurateur and cookbook author. She serves on the Board of Directors for the Mexican Cultural Institute of New York. In 1987 she opened Zarela, a Mexican restaurant that is credited as being a pioneer of regional Mexican cuisine in New York City.

“Manhattan’s most Spirited Chef” in 1969, Princess Pamela wrote the book “Princess Pamela’s Soul Food Cook Book.” From chicken ‘n’ ribs to buttermilk biscuits and black-eyed peas, the book is a mouthwatering treasury of Afro-American recipes. What Julia Child did for Beef Bourguignon, Princess Pamela does for ham hocks and turnip greens.

Thank you, chef and team, for your special salute to these women.