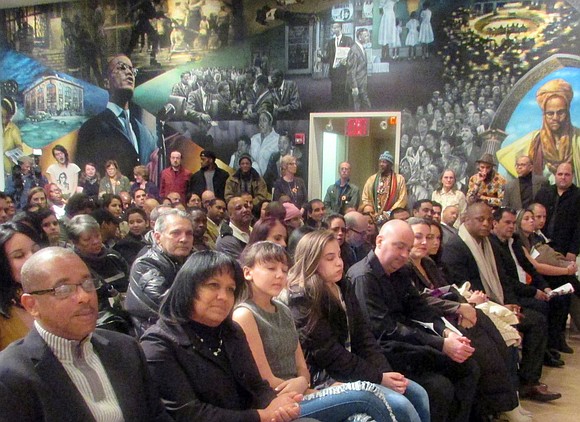 MCs Gail Walker of IFCO/Pastors for Peace and Malcolm Sacks of the Venceremos Brigade welcomed the more than 400 enthusiastic men, women and children in attendance, introducing the speakers, cultural tributes and video shorts.

As people were seated or found places to stand, drumming resounded throughout the hall from the powerful rhythms of Dr. Drum and BombaYo Afro-Boricua drumming and dance ensemble. Zayid Muhammad offered a libation, followed by a short video presenting tributes to Fidel by the U.N. representatives from Angola, Namibia and South Africa.

The video was followed by Dr. Joaquin Morante, a U.S. graduate of Cuba’s Latin American School of Medicine, and a poetic tribute by South African poet, Zenzile Khoisan (read by Sala Cyril of the Malcolm X Grassroots Movement).

Ninaj Raoul, director of Haitian Women for Haitian Refugees, spoke about the special and historic relations between Cuba and her country, and then longtime activist for Puerto Rican independence and Cuba solidarity, Frank Velgara, read his own moving poem to Castro.

Veteran anti-war and Cuba solidarity activist, Leslie Cagan (who last year received Cuba’s Medal of Friendship) called for a moment of remembrance on this anniversary of the 1999 killing of unarmed African immigrant, Amadou Diallo, by four NYPD officers.

World-renowned Cuban jazz pianist Dayramir Gonzalez and violinist Tatiana Ferrer then treated the audience to a beautiful performance, paving the way for the evening’s keynote speaker, Cuba’s permanent representative to the United Nations, Ambassador Anayansi Rodriguez, who received a standing ovation from the enthusiastic crowd.

The ambassador was followed by Jaime Mendieta, president of Casa de las Americas, established in 1955 by Cuban immigrants who supported the revolutionary struggle against the Batista dictatorship. Larry Hamm, the fiery chair of the New Jersey-based People’s Organization for Progress, brought the room to its feet with inspiring words.

In the performance of the evening, Dr. Drum and BombaYo took to the stage with a traditional bomba-plena drum and dance offering that quickly brought many in the audience onto the floor to dance, including the ambassador herself!

The final and very powerful poetic tribute of the evening was given by revolutionary activist, Zayid Muhammad, and the program concluded with a video of Castro himself produced by filmmaker Jennifer Wager and radio journalist Sally O’Brien.