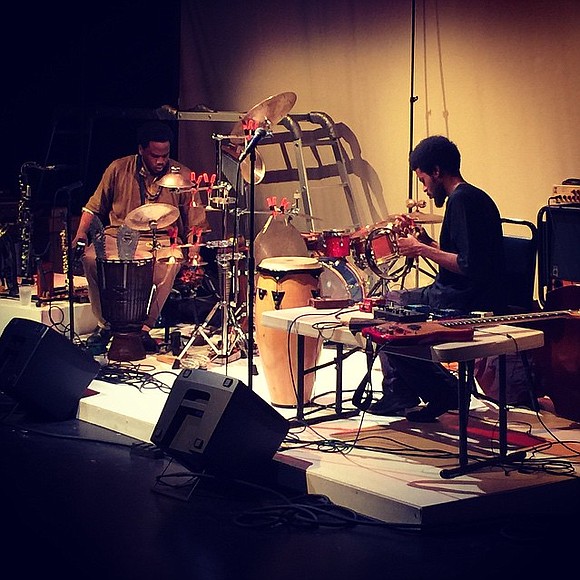 Ancestral Duo spoke as one of the presenters at “Black Lives Matter: Music, Race and Justice” at Harvard University. Marc Masters photo

The event was interesting. Many of the papers and speakers were not African-American, and there was some dissonance expressed as to how some of the speakers’ presentations tied in with the actual Black Lives Matter movement. It felt as if some of the speakers were presenting BLM as three literal words that could mean pretty much anything. There were talks on Somali life in Minnesota given by med student Meera Sury, who appeared to be of Indian descent and “Teaching Choral Music of the African Diaspora: Toward a Living Black History,” which would have been valid and acceptable if it were not taught by a white professor by the name of H. Roz Woll of City University of New York.

As a Black journalist and a community organizer who is very familiar with the reality, history and work of Black Lives Matter, I admittedly sat confused and angry during the first day of talks.

Matthew D. Morrison of New York University and Treva Lindsey of Ohio State University, both African-American professors, spoke wisely and were very aware of their Black lives and their work as educators, but they stumbled when asked about healing during the Q&A portion of their panel discussion. DiDi Delgado of the Black Lives Matter Cambridge Chapter arrived late with her newborn baby in hand after being stood up by her baby sitter. She spoke as powerfully as she could in the midst of her distraction and travel.

The first day was a little rocky, but it should be mentioned that New York artist Imani Uzuri gave a powerful performance titled “Come by Here My Lord—The Hush Arbor: Spirituals, Soundscapes and Songs of Resistance” after the formal papers and panels were concluded.

Nonetheless, it is safe to proclaim that the conference gelled by 11 a.m. the next morning in the small music hall that housed approximately 70 attendees who arrived at the free conference on a cold, brisk Saturday morning.

These presentations were the first individual presentations that used Black Lives Matter not only appropriately but also at all in the titles of their work. Their talks and papers promised an understanding of the BLM movement. All the presenters stepped out of the box and played music for the audience to listen to, showed images and paid homage to Black artists of the past and present, such as Moor Mother, Burnt Sugar, Heroes of Gang Leaders and Amiri Baraka. These musicians, professors and poets made sense. Moore and Stewart gave a dense history of the Black Arts movement and activism in the 1960s, Bradley shared music, videos and images of Black artists who represent Black Lives Matter as a musical aesthetic in the New York music scene and Horton spoke with dips and cadences in his talk, making his words flow and bend, producing a poetic tone to his scholarly dissertation. Their presentations were thoughtful, relevant and comforting.

The young coordinator of the conference, Ian Copeland, told the Harvard Crimson, “We were inspired by and also troubled by ... police shootings throughout the United States, but also what seemed to be increasing hostility to the Black Lives Matter movement in the political sphere ... Music is a big resource for people dealing with trauma and finding expression. Popular music in particular can be a way to bring people together and to call people to action.”

His quote makes sense. When I approached him during the lunch break, he told me that my concerns and remarks, some of which are stated in this piece, were valid. He was warm and seemed genuine. Nothing is ever perfect, but the attempt Harvard made to have a true discourse about Black Lives Matter, police brutality and the state of Black music in 2017 was notable and timely.