Okolo sets record in the 500 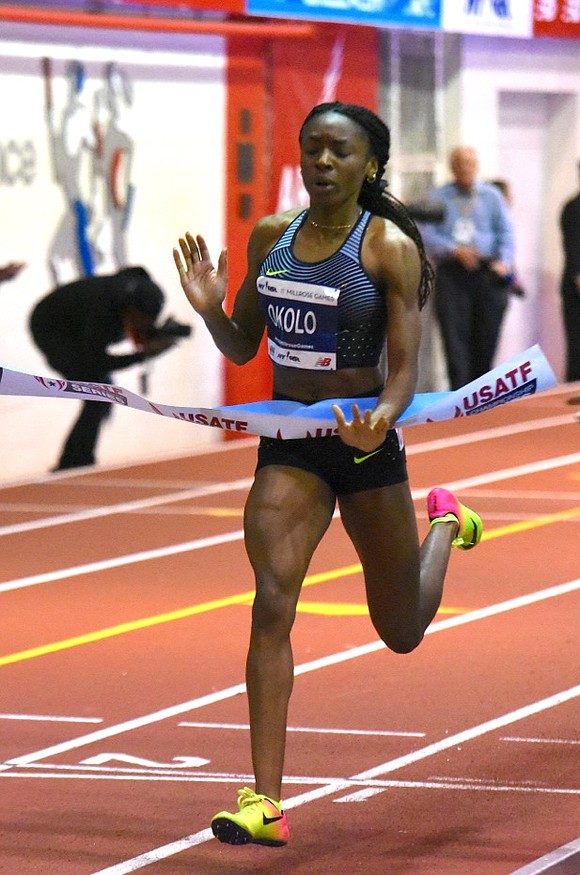 “My plan was to run a fast 300 and then finish the last lap strong,” said Olympian Courtney Okolo, who set a new world indoor record in the 500 meters at Saturday’s 110th Millrose Games. “I didn’t get as far out front as I wanted to, but it worked out.”

Queens native and Olympic gold medalist in the 400-meter hurdles Dalilah Muhammad, returning to the Armory track for the first time since 2011, was disappointed with her third-place finish but excited to be back in New York. “I kind of held back and was holding out for the end,” said Muhammad.

Upsets are often the story at Millrose, which was the case in the 60-meter dash, as Dezerea Bryant, in just her second year in pro track, upset Olympic gold medalists Morolake Akinosun and Tianna Bartoletta. Bryant said she feels comfortable running the 60, 100 and 200 and being a good starter certainly helps in the 60.

“This is my first time at Millrose and it’s awesome,” said Bryant, whose time was 7.12 seconds in her second race of indoor season. The excitement around track and field coming off the Rio Olympics is inspiring. “It definitely gets me pumped up. … [This is a] fast track. I love fast.”

A week after her wedding to Maicel Uibo, Shaunae Miller of the Bahamas, Olympic gold medalist in the 400 meters, won the 300 meters at Millrose in 35.71, defeating American Olympians Ashley Spencer, Natasha Hastings and Sydney McLaughlin.

“I’m just thankful to God that everything went well,” said Miller. “I got a little sick after the wedding, but everything turned out in my favor. I came away with a [personal record]. I can be more than happy. … I’m really not an indoor person, but I think it went pretty well.”

Hastings was disappointed to finish third, but she is always happy to be back in New York. “I feel like the Armory raised me; I’ve been running here since I was 9 years old—even before it was a banked track,” said Hastings. “Every time I come back, it’s such a nostalgic feeling.

“This is my very first race of the season,” she added. “The race served its purpose. It was to come out here, get a good run, see where I am and go home and make the necessary adjustments.”