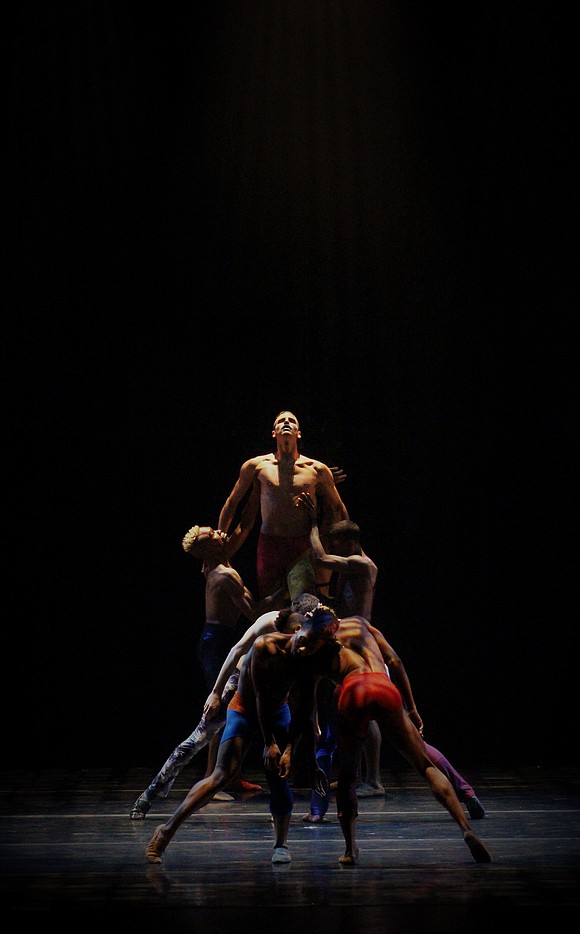 Count on beautiful bodies moving through space as if there is nothing else to do but dance, and Complexions Contemporary Ballet, the brain-child of co-founders/artistic directors Dwight Rhoden and Desmond Richardson, is a sure bet. For their two-week engagement at the Joyce Theater (Jan. 24 to Feb. 5), there were two programs of works by Rhoden. Richardson, a staple each season, did not perform.

First up on Program A was “Gutter Glitter” (world premiere), in which a slew of solos and duets form within large groups (a cast of 13) of bodies contorting, hair flying and the diva-like walk and stare. “Gutter Glitter” launches “the collage series,” an ongoing initiative created by Rhoden in which new works are presented “in a visual collage format that seeks to find the line of commonality within diverse elements,” notes the release. “So Not A…” (an epilogue to “Gutter Glitter”), a duet for Natiya Kezevadze and Clifford Williams, followed.

The hit of the evening was the music by late rock icon David Bowie, which accompanied “Star Dust, A Ballet Tribute to David Bowie” (New York premiere). There was “Lazarus” released days before Bowie’s death (Jan. 10, 2016), “Changes,” “Space Oddity,” “1984,” “Modern Love” and “Young Americans,” among others.

In all, it took nine sections to bring Rhoden’s tribute to life, and the dancers were all in. The curtain rises and a gasp comes from the audience in response to Michael Korsch’s psychedelic, attention-grabbing streams of lights against bodies in shadows, and a shimmering curtain across the back wall. In the background, Bowie’s “Lazarus” is booming. There can be no Bowie without addressing his penchant for fashion and gender-bending, and so Christine Darch’s costumes fit the call. The dancers don skimpy costumes that show off their skilled and glistening muscles, pointe shoes or shiny boots of course included. Andrew Brader and Terk Lewis Waters are right on when they “take the mic” interchangeably as Bowie. Doug Baum, Greg Blackmon and Timothy Stickney would also get a turn to wind up the audience as “Bowie.” Between the lip-syncing, funky Bowie-esque full-frontal performance style and hyper-sexual movement canon, thanks to Rhoden, “Star Dust” was a good trip down Bowie’s memory lane. There is a plan for an evening-length work. “Star Dust” was repeated in Program B along with “Ballad Unto…” (2015).