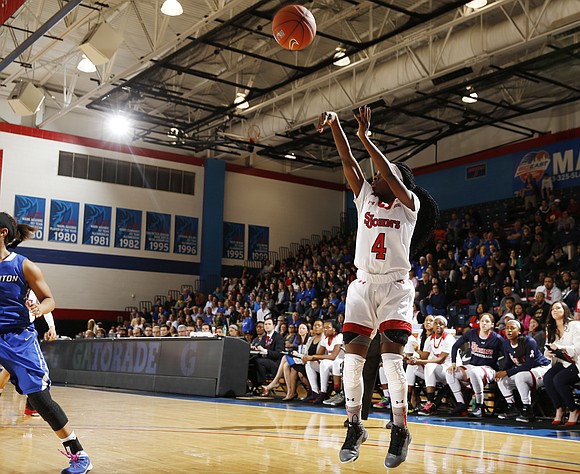 Aaliyah Lewis may be short in stature, but she's long on persistence and leadership. St. John's Athletics photo

St. John’s University women’s basketball spent last weekend on the road—winning handily against Providence University 71-47 and dropping a tight game to Creighton University 60-67. Over the past decade, the Red Storm has become a postseason fixture, usually in the NCAA Tournament. Although this has been a tough season—18-10 overall and 10-7 in Big East conference play—the players, most notably the seniors, are tenacious in driving to the finish.

“I’m actually happy with some of the players on this team and their growth and a lot of people stepping up,” said senior point guard Aaliyah Lewis. “We’ve had a lot of ups and downs, but I think that brought us together more. Now that we’re toward the end, I think right now we’re going to lock in and focus…because we’re focused on trying to make the NCAA [Tournament].”

As the point guard/floor general, Lewis, a Staten Island native, has long been a leader on the team. A starter since her sophomore year, she has become more vocal over time as she has grown to understand her impact on the team as a whole. Lewis has not hesitated to speak to previous players i to develop her leadership skills.

“They gave me the advice, ‘You’re the point guard. You’re the leader,’” she said. “I took in that role. I’m being vocal and just trying to push the team to be better every day. I’m the teacher now.”

At 5-foot-5, Lewis knows she’s short in stature, but she’s tried to make up for it with determination and skill. She’s third on the Red Storm in scoring, averaging 10.5 points per game. She’s obviously leading the team in assists.

“I want to bring my energy every day,” Lewis said. “I want people to know—I’m probably one of the toughest point guards. I think it’s actually cool being the littlest one out there. First thing, a lot of people underestimate you. When you go out there, you have to play with a chip on your shoulder and play like you’re everyone else’s height. When I’m on the court, I think I’m 7 feet.”