Viola on the front line at 80 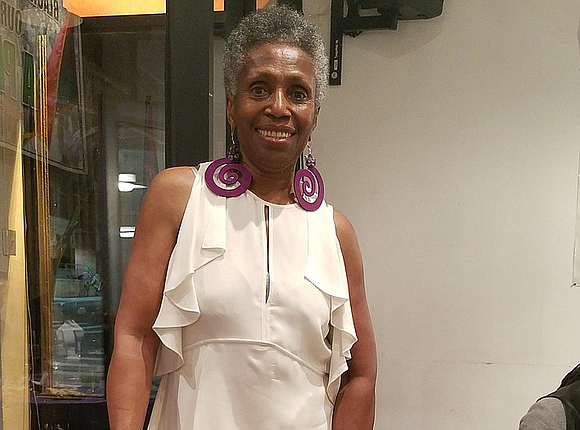 Veteran political strategist, educator and organizer Viola Plummer is 80 years young! A birthday celebration was held at the historic landmark cultural institution Sistas’ Place, founded in 1995 by the December 12th Movement and which features live jazz with A-list musicians. Plummer, elated and energetic, was surrounded by friends, peers and family, who honored her decades-long contribution to the freedom journey of African people in the United States and the Pan-African liberation support on the continent.

For Viola Plummer on the octogenarian occasion of her 80th birthday, February 17, 2017:

Hewn from the hem of Harriet’s garment

Adorned with the apparel and arsenal of Asantewaa

Girded within the Nubian garrison of Granny Nanny

A weusi woman warrior with a D-12 dossier

Documenting decades of dedication and devotion

Documenting decades of discussion and debate

Documenting decades of discourse and diplomacy

Documenting decades of determination and decisiveness

Documenting decades of dispatch and deployment

Documenting decades of daring and discipline

Definitive dates on the calendar of combat

Doyenne to the twelfth power

Dynamics of a D dominant 12th chord in a Coltrane composition

A December detail with 12 disciples

A diurnal declaration to the 12th of Forever

Building a bustling Brooklyn base into a pan-Afrikan place.

Armed with the aura of Abubadika

Enveloped within the erudition of Elombe

Motivated by the might of Mugabe and the magnificence of Malcolm

In the trenches, in the courts, on the tarmacs, at the ports

On the sidewalk, in the street: a movement of melanin fists and marching feet

As chairperson of the December 12th Movement, Plummer has been at the forefront of local, national and international action on the issues leading toward mass mobilization on racism, self-determination, reparations, quality health care, housing, criminal justice and education. The movement held massive dynamic street rallies marches, including the Day of Outrage, the Million Youth March in partnership with the late Dr. Khalid Muhammad and the first Millions for Reparations rally in Washington, D.C.

December 12th Movement International Secretariat, a nongovernmental organization with consultative status in the United Nations Economic and Social Council, has participated in the Commission on Human Rights since 1989, representing 40 million Africans in the United States. The secretariat has established firm ties and alliances with nations and international organizations around the world. Their consistent and persistent work has resulted in the pivotal hearings on racism and summary executions in the United States.

Further, the secretariat was instrumental in the call for the third United Nations World Conference Against Racism 2001 in Durban, South Africa, which declared the trans-Atlantic slave trade a crime against humanity and called for reparations. The secretariat led the largest U.S. delegation in history, dubbed the “Durban 400.”

Many guests praised Plummer’s fearless, outspoken “telling of the truth” and her relentless “never give up” determination that motivates the young and old to action, and expressed their genuine respect for her work. Guests included radio personality Bob Law; Dr. James McIntosh of CEMOTAP; Fela Barclift, director of the historic Little Sun People Daycare; Nayaba Arinde, editor of the Amsterdam News; Melvin Faulkner; Maurice Reid of the Commission on the Public’s Health System; and Melinda Perkins, manager of Community Board 5 in East New York. Sistas’ Place musical director, Ahmed Abdullah, the phenomenal saxophonist Rene McClean, cultural artist Nana Camille Yarborough, Amina Baraka and so many others paid tribute.

Guided by the phenomenal Plummer, the work continues. The December 12th Movement is now working on The Choice campaign, which is mobilizing toward a plebiscite. The plebiscite will be a vote for self-determination and on the political status of Africans in the United States.