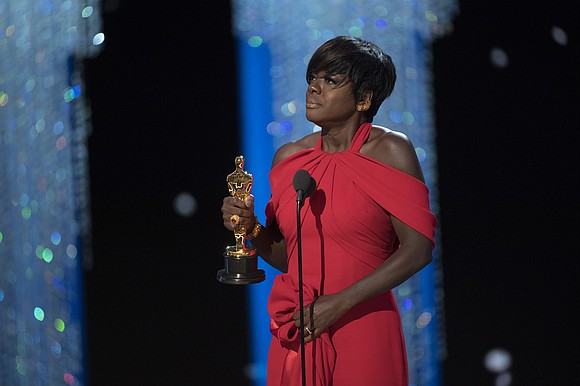 The "Fences" star picked up the award for best supporting actress at the 89th Academy Awards on Sunday. She was the favorite to win going into Hollywood's biggest night.

Davis, who beat out the likes of Octavia Spencer ("Hidden Figures") and Naomie Harris ("Moonlight"), gave an emotional speech that honored the acting profession and playwright August Wilson.

"There's one place that all the people with the greatest potential are gathered -- one place -- and that's the graveyard," she said. "People ask me all the time, what kind of stories do you want to tell, Viola? And I say, exhume those bodies."

She added: "Exhume those stories -- the stories of people who dreamed big and never saw those dreams to fruition, people who fell in love and lost. I became an artist -- and thank God I did -- because we are the only profession that celebrates what it means to live a life. So here's to August Wilson, who exhumed and exalted the ordinary people."

Davis adds her Oscar statue to a mantel that already includes a Golden Globe, a BAFTA, and a Screen Actors Guild Award.

With her Oscar nomination back in January, Davis became the first black actress to score three Academy Award nominations.

This is her first win.

Davis began to tear up when she paid tribute to her parents, saying, "I'm so thankful that God chose you to bring my into this world."

After Davis' emotional win, host Jimmy Kimmel joked that Davis "just got nominated for an Emmy for that speech."