2016: The year in review in Black theater 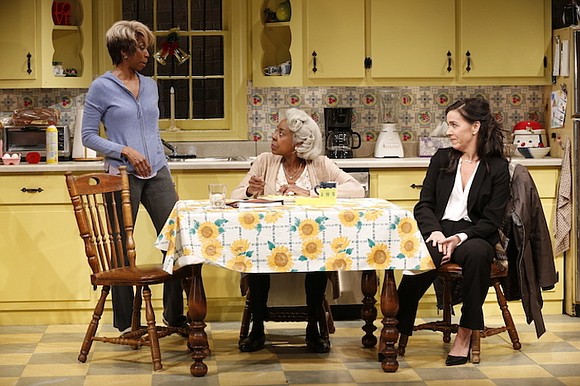 The year 2016 was full of brilliance for Blacks in theater. The year began with the phenomenal work of Lydia R. Diamond, “Smart People,” which was presented by Second Stage Theater and starred African-Americans Mahershala Ali and Tessa Thompson, along with Joshua Jackson and Anne Son. This production also featured fantastic direction by Kenny Leon. Maurice Hines came on the scene at New World Stages with a production that told the story of his life and his late brother Gregory Hines. The production, “Tappin’ Thru Life,” was wonderful and uplifting to watch. This view was obviously shared by many as it received a thumbs-up from AUDELCO voters, winning four VIV Awards for Musical Production of the Year, Outstanding Performance in a Musical Male—Maurice Hines, Choreography—Hines and Director/Musical Production—Jeff Calhoun.

Black Spectrum Theater in Queens delivered a production that made you ask, “Is this life all there is?” With founder, executive producer and playwright Carl Clay’s staging of “Timeless, the Mystery of the Dark Water,” the audience had to seriously considered the validity of reincarnation. Colman Domingo penned a moving, powerful play called “Dot,” which looked at the painful issue of Alzheimer’s disease. Domingo let the audience see how this illness affects victims and their loved ones. This subject was painful to approach, but the cast delivered a very thoughtful and skillful performance. The cast included Marjorie Johnson as Dot, a role that won her a VIV Award for Lead Actress at this year’s AUDELCO Awards. Other cast members included Sharon Washington, Stephen Conrad Moore, Libya V. Pugh and Colin Hanlon.

The Public Theater brought Phylicia Rashad back to the stage as she starred in “Head of Passes,” by Tarell Alvin McCraney. This story was a take on the biblical story of Job. Rashad gave a moving performance as the matriarch of a family that was destroyed in so many ways, but kept her faith. This play also featured performances by an extraordinarily talented cast that included Francois Battiste, J. Bernard Calloway, Alana Arenas, Arnetia Walker, John Earl Jelks and Kyle Beltran. All their skills were beautifully and touchingly brought together by director Tina Landau.

Although the run was too brief for my taste, “Eclipsed” began at The Public Theater and moved to a Broadway home at the Golden Theatre. The play by Danai Gurira maintained its stupendous script, which showed the strength, sexual abuse and suffering of four women in war-torn Liberia. When I saw it at The Public, one of the impressive factors to the show was its riveting cast, and it was this same cast that moved with the show to Broadway. It featured Lupita Nyong’o, Saycon Sengbloh, Pascale Armand and Akosua Busia, along with spot-on direction by Liesl Tommy. Drama Desk recognized the genius of Gurira as it presented her with the Sam Norkin Award for this play and another production of hers that was also performed this year called “Familiar.” Sengbloh came away with the Drama Desk Award for

Featured Actress in a Play.

Veteran actor Joe Morton took on the challenge of portraying Dick Gregory in “Turn Me Loose.” This show allowed the audience to get to know Gregory, who was much more than a comedian and actor. He was an activist who dealt with racism through humor that broke it down for people. Morton was focused and brilliant in his delivery. A performance that garnered him the VIV for Lead Actor.

I was so excited when “Les Miserables” came back to Broadway and was playing at the Imperial Theatre. This show is, without a doubt, one of my favorite musicals. But that’s not the only reason I was excited. Once I got to experience it again, I was excited about the Broadway debut of Brennyn Lark as Eponine, a role she played with superb distinction.

Boxing great Sugar Ray Robinson was the subject of “Sugar Ray,” a one-man show written by Laurence Holder, directed by Woodie King Jr. and starring Reginald L. Wilson as Robinson. The play was performed as dinner theater at the Harlem Besame Restaurant and Wilson delivered a dynamite punch as the boxer. It was a show that entertained and educated the audience. It also earned Wilson an AUDELCO Award, a VIV for Solo Performance!

Also in 2016 was the explosive mounting of “Shuffle Along or the Making of the Musical Sensation of 1921,” a musical that boasts an enormous Black cast. This production was a slice of heaven. “Shuffle Along” was conceived by F.E. Miller and Aubrey Lyles and featured music and lyrics by Noble Sissle and Eubie Blake. The show was based on a book by Miller and George C. Wolfe. Wolfe also directed the production. The cast was something out of a dream and featured Audra McDonald, Brian Stokes Mitchell, Billy Porter, Brandon Victor Dixon, Joshua Henry, Adrienne Warren and Amber Iman. In total, there were 30 Black cast members, and choreography was Savion Glover’s role. Sitting in the audience you were captivated by the singing and dancing performances, especially those of McDonald. That’s why it was understandable, but also sad, when the show announced that it would close because McDonald was pregnant and couldn’t risk continuing to perform in such a highly intense musical. When it came to awards and recognition, “Shuffle Along…” won the Drama Desk Award that honors Broadway and off-Broadway productions with the award for Outstanding Musical. Glover won the Drama Desk Award for his choreography.

“The Color Purple” came back to Broadway in 2016 in an amazing revival production. Cynthia Erivo won the Tony and Drama Desk awards for Lead Actress in a Musical for her role as Celie, something well deserved. The musical also won the Tony for Best Revival. As the year was closing out, the cast of “The Color Purple” was enhanced by the addition of Jennifer Holliday as Shug Avery. You should try to see her moving performance in this role and get to enjoy the show overall. Unfortunately, you will only have until Jan. 8 to see it.

Dominique Morrisseau’s play “Skeleton Crew” at the Atlantic Theater Company was an intense slice of life about factory workers in an auto exporting plant in Detroit. The cast featured Lynda Gravatt, Jason Dirden, Nakiya Mathis, Wendell B. Franklin and Adesola Osakalumi. This stirring production had engrossing direction by Ruben Santiago-Hudson.

“Motown the Musical” returned for a while and was marvelous! It featured an adjusted script, which ran much smoother than the first rendition. It also featured a cast that could sing and dance beautifully. I’m surprised it didn’t last. This production had a cast that could definitely do the job and included Chester Gregory, Leon Outlaw Jr., Jesse Nager, Jarran Muse and Alison Semmes, along with direction by Charles Randolph-Wright.

African-American’s lights have been shining all over the place in 2016. That marks the first time that an African-American actor was cast in the role of Raoul in “The Phantom of the Opera” on Broadway. Jordan Donica is Raoul and he is fantastic in the role. He is still currently playing the role. You should go see and support this young man, as he is making his Broadway debut. His talent is overwhelming. He makes one so proud as he effortlessly presents the character of Raoul and makes history.

“Sweat” premiered at The Public Theater, and it was a powerful, meaningful production, written by the always talented, Lynn Nottage. This production presented a realistic look at American jobs going to Mexico and citizens being put out of work. Nottage’s work was delivered by a splendid cast that included Michelle Wilson, John Earl Jelks, Johanna Day, Miriam Shor, Will Pullen, James Colby, Carlo Alban, Lance Coadie Williams and Khris Davis. (Mentioned early for starring in “The Royale,” Davis is a young man to be watched. He has a formidable stage presence.) Woodie King Jr’s New Federal Theater did a delightful job of celebrating the life and accomplishments of Zora Neale Hurston with “Zora Neale Hurston: A Theatrical Biography,” written by Laurence Holder, directed by King and starring Elizabeth Van Dyke and Joseph Lewis Edwards. It played at the Castillo Theatre on 42nd Street.

One of the most memorable performances I was blessed to see in 2016 was Anna Deavere Smith as she performed “Notes From the Field,” at Second Stage Theatre on West 43rd Street. Smith decided to tackle the subject of how many minorities are members of the prison population. She also looked at police brutality. Smith is always pushing the envelope and opening people’s eyes to what is happening in this world. This lady is passionate about pointing out society’s issues and making people acknowledge them, in a hope for change. I say kudos to Smith, who is a theatrical visionary.

A classic play by Athol Fugard was given new life in 2016, when “‘Master Harold’…and the Boys” was mounted at the Irene Diamond Stage at the Pershing Square Signature Center on West 42nd Street. The play brutally looked at the degrading treatment that Black men have endured in South Africa because of the racism of White South African men. It’s interesting though that Fugard choose to share this treatment by using the relationship between two Black men who work for a White-owned business and their relationship with the teenage son of the owner. This production was stunning to watch and featured Leon Addison Brown, Sahr Ngaujah (who starred as Fela on Broadway) and Noah Robbins.

The Billie Holiday Theatre presented the powerful political play of Richard Wesley called “Autumn.” It played at LIU’s Kumble Theater and introduced the audience to a corrupt politician, and you saw how his corruption affected the lives of the people who encountered him, usually in a negative way. You also got to see his downfall. The cast was delightful to watch and featured Jerome Preston Bates, Count Stovall, Pauletta Pearson, Dorian Crossmond Missick, Lekethia Dalcoe, Terria Joseph and Brent Langdon.

The year 2016 ended with a big bang as August Wilson’s “Jitney” debuted at Manhattan Theatre Club’s Samuel J. Friedman Theatre on West 47th Street. It will run until March 12. It is so exciting that a new generation can be introduced to the great brilliance of Wilson. The production is being performed by nine actors, seven who have performed in Wilson plays before—Harvy Blanks, Anthony Chisholm, Brandon J. Dirden, Andre Holland, Keith Randolph Smith, Ray Anthony Thomas and John Douglas Thompson—along with Carra Patterson and Michael Potts and August Wilson veteran actor and Tony Award winning director,

In 2017 make plans to support Black theater. There are so many amazing Black theater companies out there doing their best to bring our stories to the stage. Please support them. Also, when we are on Broadway, try to go and support. It is wonderful to see ourselves on a Broadway stage!