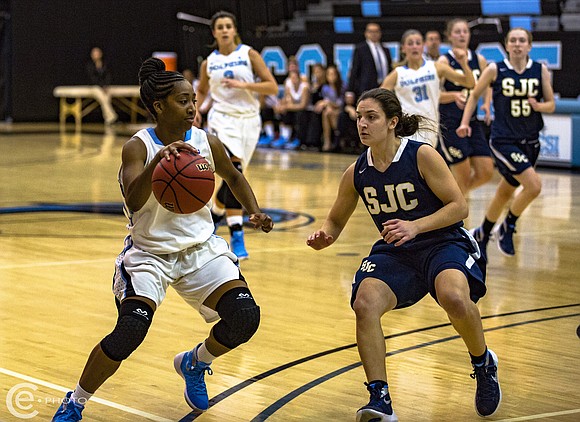 Coach Tim Shanahan cautions that it’s early in the season, but at present the College of Staten Island women’s basketball team sits atop the CUNY Athletic Conference standings at 4-0 in conference play. Although the Dolphins don’t have a lot of height, they’re making up for it with speed and stamina.

At 8-3 overall, one of the few losses came in a 60-62 squeaker with Wagner College. Both schools are on Staten Island, but Wagner plays Division I and CSI is Division III. The close score is testament to the effort CSI put forth.

“A lot of these kids could play anywhere,” said Shanahan, in his fifth year as head coach and 10th year with the program. “They’re a good group of kids. We play a certain style of basketball. We run, we push the ball. They play with a lot of energy. We wear teams out. We work on a lot of conditioning in practice.”

Shanahan said all of his players graduate, 90 percent of them in four years. He puts a priority on their educations and their futures, having them sign a code of conduct about social media. A retired Major of Family Court for the City of New York, Shanahan has long had a passion for basketball and deeply appreciates the commitment with which women play the game.

“Staten Island is a hotbed for women’s basketball,” Shanahan said. “When I’m out recruiting, I’m seeing D I’s and D II’s looking at the kids that I’m looking at. If I really want a kid, I can out recruit anybody and the school sells itself.”

There are several strong women’s basketball teams in the CUNY AC. To be competitive Shanahan spends countless hours watching film and scouting. The top three players on the Dolphins are Christina Pasaturo, Samantha Flecker and Angelique Price, all averaging double digit scoring. Price missed a couple of games because of injury, but she’s on the mend.

“We have speed and we play basic smart basketball,” Shanahan said. “Do the little things. It still comes down to Basketball 101. With women, I find it comes down to basics.

“Playing out of conference is a great test,” he added. “We’re going to keep plugging along, one game at a time. We’ve got tough games ahead of us.”