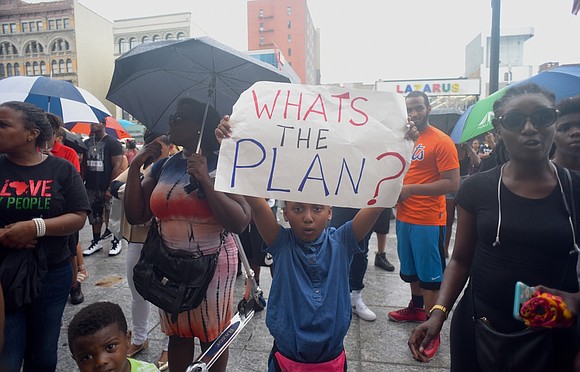 Rally for accountability for the NYPD Bill Moore photo

It was only the third and fourth days of January 2017 when two “police-involved shootings” claimed the lives of two Black males in Brooklyn. As Mayor Bill de Blasio and NYPD Police Commissioner James O'Neill tout a reduction in crime in the city overall, at the same time members of Communities United for Police Reform are demanding police policy evolution and accountability.

Chief of Patrol Terence A. Monahan said the police were called to a home on East 99th Street in Canarsie at approximately 9:30 p.m., “for a non-violent emotionally disturbed person,” and let in by a woman in the house.

He added, “As the officers entered, the male emerged from a back room and retrieved a 13-inch knife from the kitchen and advanced toward the officers. One of the officers deployed a Taser at the male which had no effect. The male continued to advance toward the officers with the knife and a second officer discharged his firearm and requested an ambulance. EMS arrived and transported the male to Brookdale Hospital, where he was pronounced deceased. The male was identified as James Owens, 63.”

Just hours later Monahan was holding another news conference to explain a second police slaying. This time it was the shooting death of 18-year-old Joshua Martino. The top cop said, “Earlier this morning at 3:40 a.m. plain clothes officers, a sergeant and two police officers, were on patrol in the vicinity of Atlantic and Grand avenues in Brooklyn. The officers heard gunfire coming from the vicinity of 990 Atlantic Ave. and saw a male firing a gun into a lounge [Beehive]. The officers exited their vehicle and identified themselves to the suspect, who ran from the officers. The suspect turned on the officers with his gun in hand and the two police officers discharged their weapons, striking the suspect in the torso.”

Claiming that “a .38 caliber revolver was recovered from the suspect,” Monahan added, “The male was taken to Brooklyn Hospital where he was pronounced deceased.”

Speaking on Hot 97 Wednesday morning, just hours after the two shootings, de Blasio said, “Crime has gone down in so many ways in New York City. We have the lowest shootings we have had the lowest number of shootings we have had in decades. And at the same time as we’ve had extraordinary reductions in crime, here is what also happened: stop-and-frisk continues to go down. It has gone down 93 percent since I took office. It was over 200,000 people stopped the year before I came in. We’re only at 13,000 people stopped in 2016. So you have stops going way down. You have arrests going way down. There have been 20 percent fewer arrests over the last three years. But at the same time, crime goes down, gang violence is going down, shootings are going down, gun seizures are going up. So we’re doing it because police and community are communicating, respecting each other—a lot less negative interaction, a lot more partnership.