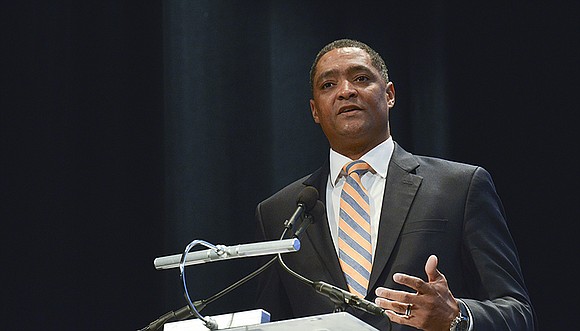 The changing of the guard in Washington, D.C. continues as Representative Cedric Richmond (LA -02) prepares to lead the Congressional Black Caucus (CBC) as chairman for the 115th Congress.

“We have much work ahead of us during the 115th Congress and I am confident Rep. Richmond will provide strong leadership on the issues we champion to ensure all Americans have an equal and equitable opportunity to achieve the American Dream,” Butterfield said.

He’s also a graduate of the Harvard University Executive Education Program at the John F. Kennedy School of Government.

Richmond said that in his role as the new chairman, the Caucus will continue to do what it’s done since its inception in 1971.

“We will carry the mantle and arms for the African-American community, for people of color, in terms of fighting for equality and against discrimination wherever it’s found,” Richmond said.

We realize that many who support the President-elect don’t hold equality and anti-discrimination among their priorities. Still, we’re going to keep on fighting for economic equality and for upward mobility for working people. Our biggest and most important task is to improve the landscape so people are able to make their lives better.”

Richmond pointed to the state of Black America using his hometown of New Orleans for illustrative purposes.

“We applaud the fact that under the Obama Administration, 14.5 million jobs have been created, but we still need to maintain our focus,” he said. “In New Orleans, the African-American male unemployment rate is 50 percent. That’s 50 percent versus the U.S. unemployment rate of 5 percent. Those differences are more than enough for us to be gravely concerned and a problem we simply cannot ignore.”

When asked about the morale of the CBC in light of the “surprising” defeat of Democratic presidential hopeful Hillary Clinton, Richmond said, “We’re resolved to fight for what’s important.”

The Louisiana lawmaker continued: “It’s never been easy for the CBC — and that’s whether the president has been Black, White, Democrat or Republican. We take our jobs seriously — now more than ever we must be unified, determined and unwilling and unable to be swayed.

For lack of a better description, an unconventional, borderline bully has won the presidency. Now other bullies seem to feel like it’s okay to follow suit. Our country has become more intolerant; we’re determined to fight against that and them.”

Richmond pointed to other priorities, as the new leadership prepares to take over at the CBC including education, criminal justice and economics.

He gave a hint as to how he intends to tackle his new job.

“We have had some outstanding leaders representing the CBC during my time in Congress,” he said. “Butterfield, Cleaver, Fudge all had different leadership styles. Mine isn’t like any of theirs.”

Richmond continued: “First, we’re going to develop an agenda during the first quarter of 2017. And I’m going to make sure we continue the fight that our previous chairpersons have started and led. We’re going to take advantage of the progress they’ve made.”