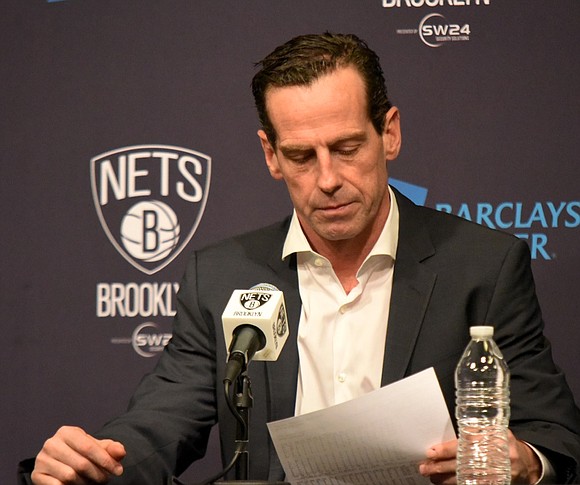 It’s been a hard, competitive month of basketball in terms of scheduling and the teams on their schedule for the Brooklyn Nets.

They’ve played and lost to the Toronto Raptors, the Golden State Warriors and the NBA’s current champions, the Cleveland Cavaliers, three of the league’s best in a span of four days—Tuesday to Friday, road game, home game, road game.

They’ve lost twice to the Philadelphia 76ers, who until recently held down last place in the Eastern Conference, for several years, first on Dec. 18 in Philly and again this week, here at home, at Barclays Center.

Who’s now in last place in the Eastern Conference? With one win in the last 13 games, from Dec. 16 until now, the Brooklyn Nets are. They’ve been reduced to small victories and teachable moments, an emphasis on staying positive.

“We know the schedule is tough,” noted Kenny Atkinson, the Nets rookie head coach, formerly an assistant with the Atlanta Hawks, who they also lost to Tuesday night, 117-97, at Barclays Center.

“I just hope that through these tough times, and our group staying together, we’ll look back on this, three months or a year and say, ‘We stayed together, we kept playing the right way.’”

In describing his team’s play, Atkinson said, “I think we’re up and down. I think our young guys are gaining valuable experience.” He was referring to rookies Isaiah Whitehead and Caris LeVert.

“I’ll throw Sean [Kilpatrick] in that boat also,” he added. “It’s really going to help those guys down the line.”

LeVert, a 6-foot-7, 22-year-old rookie guard/forward, is benefiting. Averaging 5.8 points per game and 2.5 rebounds coming off the bench, LeVert’s time on the floor has increased. He scored 11 points in 23 minutes Tuesday against the Hawks, and 19 points, 5 assists in 23 minutes against the Cavaliers Friday night—both home games. LeVert also hit for 12 in 24 minutes in Washington, D.C., against the Wizards last week, some of his most notable games.

“It’s a game, something that I love to do,” said LeVert. “I’m just a rookie trying to earn my respect.” Emphasizing his effort to rest, eat right and properly take care of himself to endure the long NBA season, he added, “I’m just trying to bring energy, effort, coming in here every day. Working hard, getting more comfortable in the offensive end.”

LeVert and his Brooklyn teammates will get a look at some more of their competitors who are already quite comfortable on the offensive end tonight (Thursday). Anthony Davis and the New Orleans Pelicans well be at Barclays tonight, a back-to-back with Brooklyn traveling to Toronto to play DeMar DeRozan, Kyle Lowry and the Raptors tomorrow (Friday) and James Harden (a highly touted MVP candidate) and the surging Houston Rockets at Barclays Sunday. They’ll then play Toronto again at home Tuesday night.