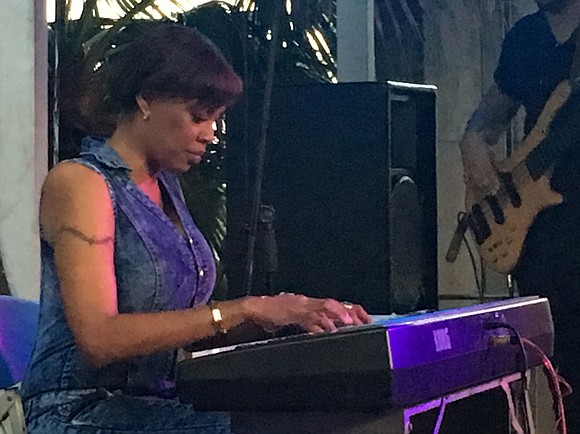 The annual International Jazz Plaza de la Habana attracts musicians from around the world. More importantly, it boosts the history and culture of this Caribbean country that preserves the music as the distinct drum voice sways through the leaves providing a rhythmic flow as the birds sing in flight.

Havana is one city where the concept of jazz dying is a mute issue. There are entirely too many young people playing everything from straight ahead jazz to Afro-Cuban jazz, fusion, to a mix of Santeria, Yoruba and Congolese rituals, Sun and hard mambo rhythms, where the conga drum retains a prominent role.

Cuba’s streets have their own unique rhythms that seem to be caught in a time warp. The cobblestone streets set the melody as horses gallop by (working harder than any cab driver). The passengers (school children or mothers with their young children) sit in the covered wagon, hiding from the midday sun.

They bounce and swing to the gallop, a thumping flow vibrating from century-old cobble stones. Shhhh… listen! Their conversational sounds represent the musical form of guajira, evoking a rural ambience, countryside lyrics that rhyme like poetry.

The bread man called out with a blues cadence, advertising bread for sale, as he walked neighborhood streets with the basket sitting on his shoulder, like in 1930s Harlem, when the iceman or the watermelon man called out with that same soul cadence.

The festival’s opening gala performance was sold out. The locals and tourists were all crowded together like anxious farmed salmon waiting to rush the state-of-the-art Teatro Mella. The largest venue of the festival, with a capacity of more than 1,500, had people sitting in the aisles and standing in the rear of the auditorium.

The native Cuban, age 86, is the original vocalist of the Buena Vista Social Club project, which she has been working with since 1996. Portuondo began singing with her sisters in the popular group, Cuarteto d’Aida, in the early 1950s.

On her introduction, she received a rousing standing ovation and flowers were presented to her. The grand lady of Cuba, known for singing boleros, sang a touching ballad and romped through a song with Chucho’s quartet’s spirited Cubana jazz inflictions. She was inspired to dance, showing off some steps from her days as a dancer in Havana’s Tropicana Club in 1950.

Chucho, whose career spans more than five decades, has earned international status, like his father, the pianist, composer and arranger Bebo Valdes, who died in 2013.

Chucho played a variety of songs, from mambos to Afro-Cuban rhythms and a few tempered with a folklorish African beat. He was later joined by Blanchard and McBride, which connected the links of the days when Dizzy Gillespie was onstage with the Cuban bandleader/composer Mario Bauza and percussionist Chano Pozo.

Blanchard later joined the Christian McBride Trio in performing their version of “Blue Monk” and “Caravan,” the extended Afro-Cuban version.

Although this show was difficult to follow, Blanchard and his Afro-fusion E-Collective, with keyboardist Fabian Almazan, guitarist Charles Altura, bassist Donald Ramsey and drummer Oscar Seaton, were up for the challenge and in blazing style delivered an intriguing performance, playing some works from their recent CD, “Breathless”

The following evening, McBride performed with his ever-explosive young trio, which included the pianist Christian Sands and drummer Jerome Jennings. The trio reconstructed their own versions (from the funk, blues and jazz mode) on noted tunes such as “Baubles, Bangles, and Beads” (from the 1953 Broadway musical “Kismet”) to “Car Wash” and Michael Jackson’s “Lady in My Life.”

Sands has grown into an exceptional pianist. A protégé of pianist/composer Dr. Billy Taylor, he continues to reach higher, as does the drummer Jennings. These two under the tutelage of their leader McBride are constantly developing their assets, as is the bassist, who with so many achievements has yet to reach his zenith.

Cesar Lopez Y Habana Ensemble was another stimulating force that shared the bill. One of the leading exponents of Latin jazz in Cuba, the saxophonist/composer Lopez is known as the Cuban Charlie Parker.

While attending the National Art School in 1985, he simultaneously began working professionally with the renowned Cuban trumpeter, vocalist and composer Bobby Carcasés, who co-founded this festival.

In 1988, Lopez was selected by Chucho Valdés to join his band Irakere, where he remained for nine years.

Lopez Y Habana Ensemble (guitarist Emilio Martini, bassist David Faya and percussionist Otto Santana) played within its repertoire of jazz that was fused with a contemporary sound of switch improvisations that made their performance an authentic work of musicianship.

This festival was a Cuba debut for the rock, pop, jazz fusion large ensemble Snarky Puppy. The ensemble, led by bassist, composer Michael League, has been getting rave reviews throughout the world. The sold-out audience was quite intrigued by their improvisations.

The ensemble’s combination of synthesizers, electric keyboards, drums, saxophones, trumpets and flute convened with a hypnotic dancing beat similar to techno. They reminded me of the group Steely Dan without the vocals and their hipness.

The Habana Festival is a nurturing pond for young musicians. The place to see these musicians was at the Pabellon Cuba (an outdoor café with plenty of room and a small stage that was always sizzling with inspired youngsters).

Also on the rise is the trombonist/composer Andres Fernandez & De Cujazz Ensemble. The six-piece band has only been together for a year but play like a well-precisioned Corvette. They play stirring jazz with African rhythms and mambo dance, and the two vocalists add a soulful pitch to the mix.

Fernandez, a native of Cuba, has been residing in Costa Rica for the past 12 years. He has played with the bassist Richard Bona. The trombonist is looking forward to playing in New York at some point. Hopefully, it will be soon, along with all the other wonderful musicians.

I’ve mentioned just a few of the stimulating highlights from the 32nd Jazz Plaza Cuba.