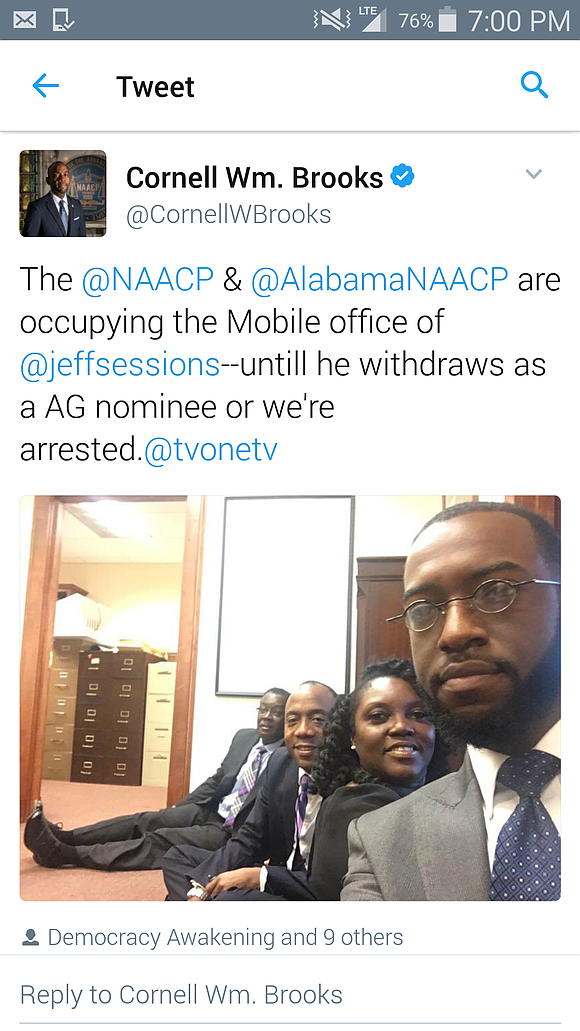 More than 200 people representing a coalition of interfaith clergy, moral leaders and activists marched Jan. 9 in Washington, D.C., calling on Congress to reject the nomination of Alabama’s Republican Sen. Jeff Sessions for the office of U.S. attorney general.

The Rev. Jennifer Butler, CEO of Faith in Public Life, stated, “As people of faith, we know our orders come from on high. We pledge today to resist by nonviolent means all who threaten to harm our neighbors. We will show up. We will sit in. We will cry out, and we will not stand down.”

Sessions’ two-day nomination hearing was held Jan. 10 and 11 before the Senate Judiciary Committee.

A week earlier, Jan. 3, Cornell William Brooks, the national president of the NAACP, was arrested after an hour-long sit-in at Sessions’ Alabama office. Brooks was joined by some two dozen civil rights activists there to call attention to the nominee’s “negative attitude toward civil rights and the Voting Rights Act,” according to The New York Times.

Sessions in his prepared remarks before the Senate Judiciary Committee promised to crack down on violent crime, work to improve morale at local police departments and remain independent of the president of the United States.

He also said he would express empathy for the civil rights struggles of African-Americans.

The Council on American-Islamic Relations, a Muslim civil rights and advocacy organization, announced Jan. 5 its opposition to the confirmation of Sessions.

One member of the U.S. Senate questioning Sessions’ nomination, in an extensive press release, was Illinois Democrat Tammy Duckworth, who particularly questioned his “troubling” record on disability issues. The U.S. Department of Justice, which Sen. Sessions would head if confirmed, plays a critical role in enforcing laws that protect the rights of disabled people, such as the Americans with Disabilities Act and the Individuals with Disabilities Act. Duckworth, who is disabled, quoted Sessions as saying that IDEA, which ensures public schools accommodate students with disabilities, is “the single most irritating problem for teachers throughout America today.”

According to Duckworth, in the 1990s, Sessions led a legal battle as Alabama’s attorney general against requiring many of Alabama’s poorest school districts be given the funds necessary to meet the needs of disabled students.

The Leadership Conference, a coalition of civil rights organizations, stated, “Sessions’ disrespect for the Constitution, Senate and the rule of law renders him unable to perform the duties of attorney general.”

“When you look at discrimination, you have to look at policy and its impact. Sen. Sessions’ immoral record shows consistent support for ideologically extremist, racist and classist polices,” stated the Rev. Dr. William J. Barber ll, president and senior lecturer, Repairers of the Breach, pastor of the Greenleaf Baptist Church, architect of the “Moral Mondays Movement” at the Jan. 9 march.

Rabbi Jason Kimelman-Block, director of Bend the Arc Jewish Action, remarked, “We are here today because we are inheritors of a tradition that believes it is self-evident that we are all created equal. We are inheritors of a tradition that is designed to resist tyranny. The role of attorney general requires a demonstrated commitment to providing equal protection under the law. Jeff Sessions unequivocally fails that test and should not be confirmed.”