Desperate Gambian leader may find all exits not closed 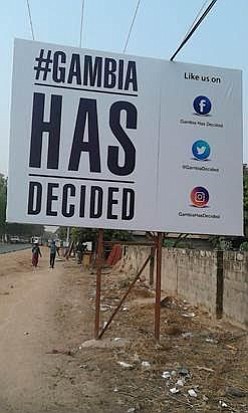 (GIN)—Gambian President Yahya Jammeh hardened his position this week in defiance of December’s election results that put opposition candidate, Adama Barrow, squarely over the top. Now, as military loyalists peel off or are jailed, it appears he may have played his last card.

For weeks, diplomatic overtures by various Pan-African institutions offering a dignified departure were turned down. Offers of asylum from Nigerian MPs were left on the table. The stated wishes of the Gambian people to have a leader of their choice were overruled.

Finally, a last-ditch effort to stop the inauguration of President-elect Barrow suffered a major setback this week as the country’s Supreme Court refused to hear a petition by Jammeh’s party.

Emmanuel Fagbenle, the country’s chief judge, denied the petition on the grounds that it listed Fagbenle, who is the only Supreme Court judge at the moment, as a party in the application, according to the Premium Times of Nigeria. Fabgenle bowed out, saying he could not give an order against himself.

Inauguration ceremonies are scheduled for this week, but the unresolved matter of Jammeh has prompted neighboring countries to prepare for a military action. Nigeria reportedly has readied some 800 troops for a “rapid reaction” military incursion should the call be made for such a response.

Close to 1,000 Gambians have already crossed the borders into neighboring countries, telling media outlets they fear chaos and violence by the remaining Jammeh loyalists.

Like other world leaders, Barrow has set up a Twitter feed. It’s called #GambiaHasDecided. Also on Twitter, longtime human rights activist Kumi Naidoo of South Africa posted the following message: “Just finished a very inspiring meeting with Gambian civil society representatives and while challenges are huge so is courage & commitment.”

Barrow has found temporary sanctuary in neighboring Senegal at the advice of regional leaders, and will return home only when his inauguration is secured—possibly under the protection of West African troops.

In the midst of the chaos, the president-elect learned to his dismay that his eight-year-old son, Habibu, died after he was bitten by a dog near the capital Banjul.

He was unable to return for his son’s funeral, which took place almost immediately, as required by Islamic law. Pictures posted on Twitter showed what appeared to be Habibu’s casket, covered in a black cotton shroud, being carried through a grove by mourners.

Jammeh, who ousted his predecessor, Sir Dawda Jawara, in a coup in 1994, once vowed to “rule for a billion years with the help of Allah.” Most recently he has shut down independent radio stations, arrested activists and sent soldiers to storm the electoral commission.

Malian President Ibrahim Boubacar Keita stated, “I dare to hope that African wisdom will convince our brother [to] understand the greater good for the Gambia, which does not need a bloodbath.”