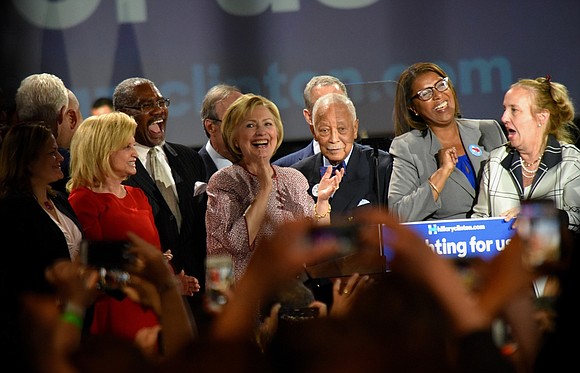 Sometimes New Yorkers forget our history. They also forget that in this great city of change, anything can and does happen daily. The unexpected? No such word in New York’s City’s vocabulary.

What we don’t usually have is unity. Our politics are fractious. New York City citizens are happy to be different. We speculate, challenge and disagree with the predictions of our fellow New Yorkers. And there aren’t many public figures that we agree on—except those politicos we don’t like. When we like, we like. We dislike with great strength. And when we love someone, well, we love hard. Really hard.

We love Hillary Clinton, and her loss this past November in the race for president shocked and numbed. New Yorkers still wonder what happened. Why isn’t she taking the oath of office? Where will she go and what will she do? It’s a hard one to understand. Here in the state she represented in the United States Senate—where she was elected and re-elected to six-year terms—she remains wildly popular. In the borders of New York City, she is a superstar. Hillary sightings since November are newspaper gossip column items.

New Yorkers are looking for Clinton. We know we won’t find her in the Senate, or in the secretary of state’s office in Washington. The results of the presidential campaign are clear and any doubters should make their way to Fifth Avenue in the 50s to see the police presence. Yes. The president of the United States is named Donald Trump, not Hillary Clinton, and Trump Tower, bearing his name, is White House North.

Lots of New Yorkers are unhappy. They want Clinton. But they won’t be having her the way they thought they would. There will be no photos of Hill and Bill entering the White House or shots of President Hillary Clinton doing the business of the nation from the Oval Office.

Close your eyes and remember 2000, for those New Yorkers who can. Pollsters—and maybe some of the same geniuses who said Secretary Clinton was a lock this time—were betting that the U.S. Senator from New York to replace Daniel Patrick Moynihan who had gone on to his final reward, would be a lot of people. But Hillary Clinton wasn’t on the list. The then dean of the New York congressional delegation, Manhattan’s Charles B. Rangel, helped start a draft movement. The field of possible Senate candidates cleared. Clinton, after a less than arduous primary became the Democratic nominee. The pollsters struck again. She couldn’t win a November general election, they predicted. But she did. There was never a Senator named Rick Lazio.

Then she ran for re-election, and then for president. New Yorkers stood with her always. We voted for her and when the incoming criticism started, as it always does when the name Clinton is mentioned, we stood firmly loyal. Clinton unified us. In the Big Apple, we adopted her, pretending that her Chicago accent was just something she picked up along the way, and thus no permanent flaw. She was Hillary, and the rest of the nation could take a hike. We mostly all agreed, very difficult for anyone who knows anything about the collective character of this city. And the numbers consistently proved it.