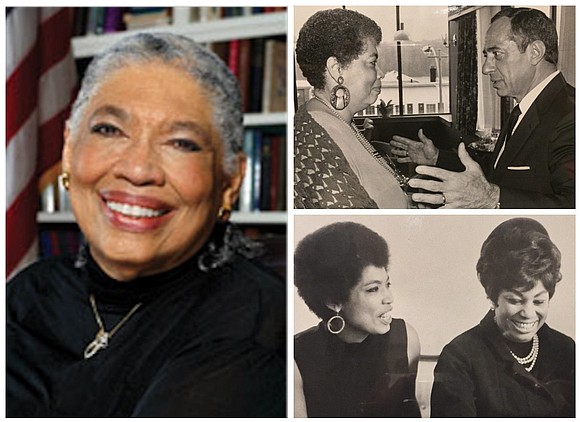 There’s a photo of Wayne State University’s College of Medicine graduating class in Detroit in 1959. Of the 66 graduates, there are two Black men, one white woman, and one Black woman—Phyllis Harrison. This was not the first or the last time she would be so distinguished. Her life was replete with firsts. Dr. Phyllis Harrison-Ross made her transition Monday at Mt. Sinai Hospital in Manhattan. She was 80 and had been hospitalized for several days.

It’s very difficult to find a capstone of her astonishing career, her remarkable record of service and commitment. Some would say it was her innovative program for children with developmental disabilities and mental illnesses. Others might suggest it was her appointment as a psychiatrist to the Medical Review Board of the New York State Commission on Corrections where she served with distinction. And when an award is named in your honor that may top it all.

This quest for excellence began in Michigan at Albion College, which she started at age 14 and received her Bachelor of Science degree in 1956. Three years later, at age 21, she earned her medical degree from Wayne State University of Medicine. From 1964-1966 she completed her fellowship at the Albert Einstein College of Medicine. She began her medical career as a pediatrician in Harlem and went on trained hundreds of physicians and become a mentor to many.

In 1968, because of her pioneering work in rehabilitative and therapeutic programs that enabled children with severe physical, emotional and developmental disabilities to be mainstreamed into public schools, Gov. Nelson Rockefeller appointed her to the NYS Fleischmann Commission to study Quality, Cost and Financing of Primary and Secondary Education with a concentration on programs for children with special educational needs.

From the inception of the Metropolitan Hospital Community Mental Health Center in 1973 to 1998, Harrison-Ross was at the helm as its director and chief of Psychiatry. Concurrent with this responsibility, by 1975 she was a co-founder of the New York City Federation of Mental Health, Mental Retardation and Alcoholism Services. Throughout the 1970s she was a tireless consultant and adviser with a number of trips to the South, including her work with the National Institute of Mental Health regarding Community Disaster Assessment and Treatment following the murders of Black children in Atlanta. In 1987, she was among three nationwide finalists recommended to President Reagan to be the director of the National Institute of Mental Health.

Had she been successful in that endeavor it would have curtailed her service to New York City as director of Psychiatry in Municipal Hospitals; chairperson of the Minority Advisory Committee as well as a member of Directors of NYS Alliance for the Mentally Ill. Her long tenure on the New York State Commission on Corrections was the result of appointments by governor after governor, all of whom recognized her insight and brilliance on health issues of inmates in the state’s prisons, jails and juvenile facilities.

To list her affiliations would be exhausting, but we should note she was one of the founding members of Black Psychiatrist of America and its second president. She was the founder of Black Psychiatrists of Greater New York and she served as a nationally elected member of the Governing Council of the American Hospital Association until 1998. She was also a board member of the Fieldston School. She began advocating for telemedicine in the late 1990s, well before in was popular. She was the recipient of countless awards and citations, including being inducted as a Life Fellow of the American Psychiatric Association.

One of her major concerns was about the mental health of people in custody and how to improve their contact with relatives and loved ones on the outside. “The most important thing is keeping that connection with family and keeping it in a reasonable way—not having to make those long, stressful trips,” she told a reporter in conjunction with her role as chair of the New York Society for Ethical Culture’s Social Services Board, which manages the televisiting program for inmates. “That connection helps enormously with reducing recidivism and aids in the mental health of both the child and the incarcerated parent.”

More than anyone Harrison-Ross was aware that such a program to facilitate contact between prisoners and family was not an end-all; even so, she contended, “That’s not because of some lack of moral conviction in that family, it’s because this is a major traumatic occurrence in their life, and there’s no place to turn, no support. We provide these children with that support—that’s how we’re going to break the cycle of incarceration.”

Two major catastrophes—the attack on the World Trade Center and the Katrina Hurricane—required her mental health expertise, and subsequently she volunteered to preside of All Healers Mental Health Alliance. She was no stranger to the media, and many may recall the interview Sheryl McCarthy conducted with her on CUNY TV. For more than a quarter century she was a member of the board of directors of Children’s Television Workshop, producers of “Sesame Street.” As mentioned above, she began using teleconferencing to do psychiatric treatment, supervision and training as well as televisitation to incarcerated or otherwise institutionalized individuals and families.

Harrison-Ross authored numerous articles, reviews, chapters in textbooks and research papers. She published two books on child and adolescent development, “The Black Child—A Parent’s Guide” (with Barbara Wyden) and “Getting it Together,” a textbook for junior and senior high school students who are reading on a fifth-grade level.

But the writing and research were often overshadowed by her dedication to prison reform and vigilantly keeping tabs on the condition of inmates, none more controversial than the death of Bradley Ballard, who died at Rikers Island in 2013. For six days he lay dead in his cell, covered with feces and ignored by supervisors. Harrison-Ross, in her capacity as the commissioner of the oversight panel, was furious, and she recommended that the Department of Justice open a criminal investigation and a more comprehensive investigation into the Rikers Island facility.

This action was typical of her resolve, whether on prison affairs or working in the mental health area. One of her last public appearances was on a panel to discuss the legacy of Dr. Kenneth and Mamie Clark and their role in founding the Northside Center for Child Development, where she was a board member for years.

Her words about the incomparable devotion of the Clarks to child development mirrored her own contributions, and we would need a few more pages to fully cover her expansive career and service.

The funeral or memorial services are as follows: