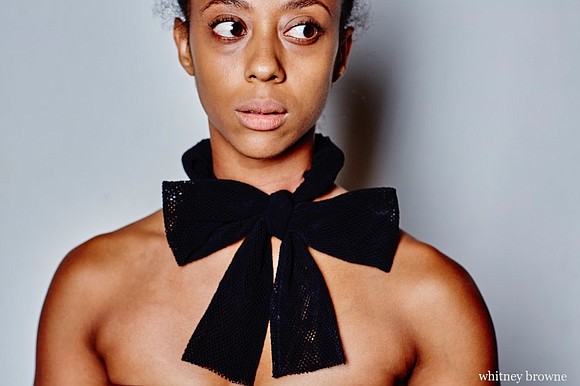 The experience begins on the trip to the Bronx Academy of Arts and Dance, now all of 18 years old but still a hidden gem, run by Artur Aviles (artistic director) and Charles Rice-Gonzalez (executive director), that give emerging artists a platform to show their work. The experience continues once you enter the space: part church, part party place, part offices and sectioned off by shimmering strands that form a curtain—part performance space. The audience clusters in the middle where they buy a drink, pull out smartphones and record the happenings or catch up with longtime friends. Soon, pounding dance hall, reggae and hip-hop music fill the room and bodies begin to move. Meanwhile, with a wide grin, Aviles walks through with a camera in hand and asked “What, are you at a dance show?” He laughs and continues to navigate the crowd. Before we realize it, Fana Fraser, the soloist for the evening, is also in the audience and the show has already begun. Decked out in high-heeled black boots, sleek black leggings, jeweled bra, a faux fur jacket, ski goggles on top of her head and a lollipop, she too navigates the crowd—this performance was her show. She twerked, bumped and danced with other bodies for a good while, to song after song and renewed her lollipop once it got past the gum phase and after a good chew. This dance was just the beginning of Fraser’s “Imelda, Iveth & Irene” (Nov. 19).

Still chewing and moving to the beat with the crowd, Fraser feverishly rubs her palms together, gradually make it to all fours, and crawls into the cordoned-off performance space. We follow. What ensues is an intimate peek into the three characters Fraser molds with such care. Once we’re seated, she appears, crawling into a new world—there’s a table, lamp, books, chair, fan, pillows and a jar of Spam. With deft precision, she lets out a huge belch, sticks the gum to table, turns on the fan, rubs her belly and between sounds of exhaustion and difficulty, opens the jar (smelling up the space) with the key then a knife. When the knife doesn’t work, she huffs, “Why does this always happen?” Then she uses her hand to get and squeeze bits together for a proper mouthful. She brilliantly shifts characters again, struggling with fishnet stockings pulled only to her calf, and clunky platform shoes that present a challenge to run, or even walk from one side of the space to another. Eventually she runs behind the seats, and the lights go out, we don’t know it yet, but it’s over. If each character (Imelda, Iveth & Irene) and their names are meant to match and we didn’t get that, we were given the space to just follow along and that’s fine because it was good to be lost in Fraser’s fast-growing, character-driven imaginative world.