Development ties between Israel and Ghana 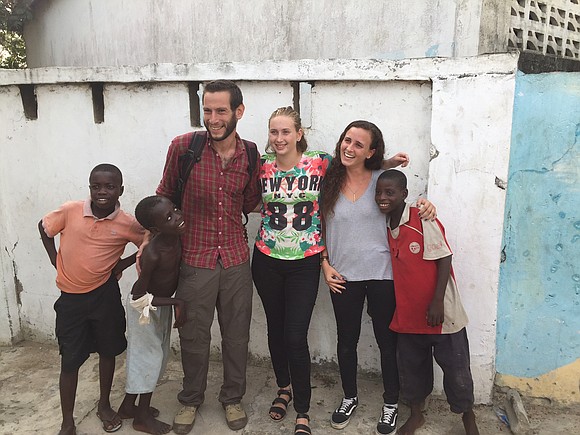 This gift was the beginning of long and fruitful relations between the two countries, which continues today, and several African-American journalists were invited by the Consulate General of Israel in New York to cover Israeli-Ghanaian development projects in Ghana.

It’s a very long journey along Ghana’s seacoast to get to Winneba, where one of the Israeli government’s Project Ten is flourishing. The journalists, including this reporter, Brandon Gates, Bobbi Booker, Maudlyne Ihejieika, Chad Joseph Ubiwa and Stephanie McNeal were greeted by Ori Schnitzer, the lead volunteer and a noted international development director.

“Our project here is only two years old,” Schnitzer explained, “and we are here to help them help themselves. We are not going to be here forever. But the best thing is to show you what we are doing.”

At the first stop, the reporters encountered a classroom with a dozen or so young Ghanaians, all of them eager to meet the visitors as well as to continue their lessons. There were five volunteers, all of whom were from Israel for two or three months.

Rather than give their names, they seemed more interested in the progress they were having with the young people under their charge four days a week for several hours. “We get more than we can handle,” one of the volunteers said. Let’s call her Maya. “They pass by the building, look in, and wish to join in whatever we are doing in the class.”

On this occasion, the volunteers were giving them lessons in acting. “We want to expand their imaginations and creativity,” Maya said. “To see how well they express themselves after such a short time with us is very rewarding. And that’s one of our prime motivations.”

From the school house the journalists, led by Shimon Mercer-Wood of the Israeli Consulate in New York, trekked up the road to where a farm is under development. Kojo, a young Ghanaian and Michael, a lead volunteer, oversee the farm, where tomatoes, basil, peppers and other vegetables are beginning to sprout. “I have been here only two months,” said Michael, “and it’s been good to have Kojo working with me here.”

Kojo is from the local area and saw working at the farm as an opportunity to acquire some training in growing products as well as to help his community. “I have not been here very long, but I plan to stay around long enough to gain some farming skills and the project has been very helpful for me and the community.”

At another site, Kwame is the teacher and offers details on the teaching process in mathematics, language arts and other life skill training. “They are very eager to learn and the project provides them an opportunity to grow and add to their regular schooling,” he said.

This visit was just the first day of a four-day stay and it ended quite joyously at the house of Israel’s ambassador to Ghana, Ami Mehl, where the journalists were able to converse and discuss that day’s events.

Tuesday, the journalists depart for Kumasi to visit another Israeli-led project, tour a hospital and check out the Darko chicken farms. The Ghana Medical Centre is on the agenda for Wednesday, and on Thursday, the final day, the journalists will attend the Israel Business Chamber in Labone.

The ties that bound Israel with Ghana at the inception of Ghana’s independence, has given the African country the boost it needs toward total economic and cultural sustainability.

Before settling down to work, the journalists were given a guided tour of the slave castle at Cape Coast by historian Mark Tettheh. Unlike the thousands, if not millions, of African captives who were secured in the castle’s dungeons awaiting a crammed journey across the Atlantic, the reporters were able to walk back through the “Door of No Return.”