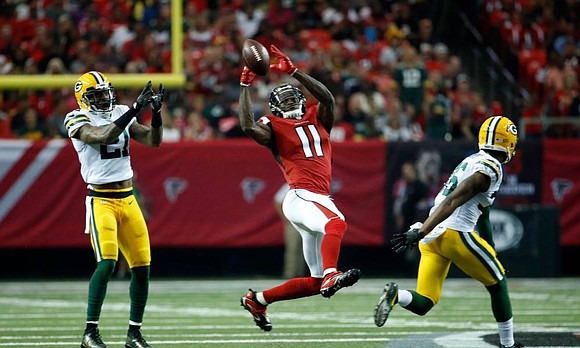 In the week leading up to the NFC championship game, the Atlanta Falcons, the most dynamic and talent-laden offense in the NFL, were persistently queried as to how they would slow down Green Bay Packers quarterback Aaron Rodgers, who had carried his team to eight straight wins, including two in the playoffs, a 38-13 spanking of the New York Giants at home in their wild card game and a gripping 34-31 win in Dallas over the Cowboys in the divisional round.

The questions were warranted. If anyone could match the high-powered Falcons offense featuring quarterback Matt Ryan, wide receiver Julio Jones and running backs Devonta Freeman and Tevin Coleman, it was Rodgers and the Packers, who had posted 30 points or more in six consecutive games heading into their engagement.

It was a compelling storyline but one that didn’t reflect the premise that should have been obvious to anyone who had watched the Falcons’ offense evolve during the course of the regular season and their 36-20 win over the Seattle Seahawks on the second weekend of the playoffs: No matter how unstoppable and magical Rodgers had been since the end of November, he wouldn’t be able to counteract a Packers defense that would be at the mercy of Ryan and his offense.

The aforementioned hypothesis held true as the 13-5 Falcons pounced on the Packers from the opening drive of the game, scoring early and often as they crushed their overmatched opponent by 44-21, earning the franchise its second ever Super Bowl appearance where they will meet the 16-2 AFC champion New England Patriots at NRG Stadium in Houston on Feb 5.

“Their offense is hot right now,” Rodgers said. “Playing a team like that, you’ve got to start faster. We had no points in the first half. You’re not going to win many games like that.”

Indeed, Rodgers and the Packers’ offense was uncharacteristically and shockingly ineffective. The Falcons pass rush pressured Rodgers for much of the afternoon and blanketed the Packers’ capable receivers. Rodgers’ respectable numbers, finishing the game 27 for 45 for 287 yards and three touchdowns, were misleading.

In contrast, the Falcons’ offense had their way with the Packers’ defense, especially Ryan and Jones. Ryan was as precise as a surgeon, going 27 for 38 for 392 yards and four touchdowns. Two were to Jones, who comported himself like a man among boys in catching nine passes for 180 yards, including a spectacular 73-yard touchdown reception.

“He’s a beast,” Ryan said in complimenting Jones. “I’ve been lucky to play with him as long as I have.”

Now the Falcons will have to get past the most prolific coach-quarterback duo in the history of the NFL in Bill Belichick and Tom Brady. The pair will be making their record seventh Super Bowl appearance. Slaying those legendary dragons will be a difficult challenge for the Falcons. But they are well equipped to do it.