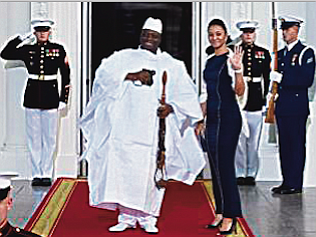 (GIN) – Former president of Gambia, Yahya Jammeh, packed a Chadian cargo plane with luxury cars and went into exile late Saturday, barely missing the West African regional troops on their way to remove him by force if necessary.

Jammeh, who lost a re-election bid Dec. 1 but resisted stepping down, accepted an invitation from President Teodoro Obiang, a highly unpopular leader in the Central African nation of Equatorial Guinea. This offer sparked objections by the opposition Convergence for Social Democracy, pointing out that Gambia’s instability was a result of ex-president Jammeh’s own refusal to relinquish power after 22 years.

“We are not against Pan-Africanism, but we are in favor of a more objective Pan-Africanism that does not consist in just bringing over the waste of Africa,” the CSD said.

According to local media reports, Jammeh departed with two Rolls-Royces, a Mercedes-Benz and other cars and luxury items.

A diplomat, speaking to The New York Times, said Jammeh had tried to withdraw money from the Gambian central bank in recent weeks but was denied access. Two weeks ago, he shipped 22 vehicles to Mauritania.

Al Jazeera reported that Jammeh plundered state coffers in his final weeks in power, helping himself to more than $11 million. An adviser to new President Adama Barrow told reporters, “The coffers are largely empty… As we take over, the government of The Gambia is in financial distress.”

While Barrow awaits a green light from the regional troops clearing out “secret weapons depots” among Jammeh loyalists, he began naming his cabinet, starting with Fatoumatta Tambajang, a prominent pro-democracy activist, as vice president.

Tambajang was part of the opposition coalition that unseated Jammeh. A former United Nations Development Program gender/development expert, she also served as minister of Health, Social Welfare and Women’s Affairs in the government of the ousted president.

As of press time, it was still unclear when Barrow would arrive. For now, he is camped out with family and aides in a house he owns in an upscale neighborhood in Dakar, working on naming his cabinet.

As Jammeh left the country, the United Nations, the African Union and the Economic Community of West African States released a joint declaration saying they were committed to preventing the seizure of assets from the former president and his family and loyalists.

A Truth and Reconciliation Committee has been proposed. Ironically, Jammeh may even be allowed to relocate to the United States, where he has a house in Potomac, Md.