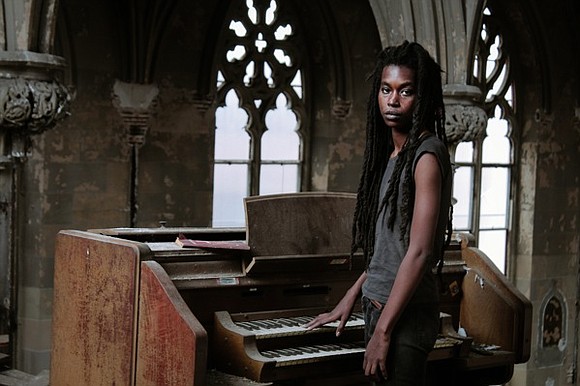 Camae Ayewa, better known as rapper, poet and producer Moor Mother Goddess, creates multi-tiered art installations that are complex and diversified. Her music and art emerges from her gift of observance, and her ability to tell vivid stories about her past, her family and the neighborhood in which she grew up.

Her newest installation, “Fetish Bones,” includes a full album out on Don Giovanni Records and a book of poetry printed by her underground imprint, House of Future Sciences. The book is intense and jarring and embodies pitch-black comedies about living in the ghetto, truthful and painful soliloquies on sexual violence and a witty collection of haikus. “[Fetish Bones] relates to how people fetishize their own race, body and culture for political gain and for capital gain,” Ayewa expressed via telephone. “I knew I was going to release a vinyl album, so I wanted to go all-out. Usually when I make an album, I create a zine, so that’s something I’ve always done. I add a literary aspect to my music because I am a writer also.”

Her music and literary influences are well defined. As a writer, Ayewa is influenced by Amiri Baraka and Sonia Sanchez, who musically were also in the tradition of free jazz, a music genre that highly influences her work. She has also been reported to “idolize Gil Scott Heron.” Outside of her influences, Ayewa’s personal and intentional visual, lyrical and literary subject matter has much to do with freeing herself from traditional expectations of marketing herself as a sexual, scantily clad artist. “I don’t ever mention anything about me having sex with anyone in my music, which [in music] is a normal thing,” she said. “I feel like there are enough oversexualized sensations out there that I don’t feel I need to contribute to that. I have something meaningful to say. Some artists feel like they can’t create without doing that. And sometimes the reality is that the artists that are doing that are typically the ones being seen.”

Going along with that intention and understanding, “Fetish Bones” deals directly with exploitation. “It relates to how people fetishize their own race, body, and culture for political gain and for capital gain,” Ayewa repeated. “I wouldn’t define it as a feminist act, but it could fall into that category.”

Her performances don’t need to be obstructed by flashy clothes, overdone makeup or distracting props. The way Ayewa reads and moves is invigorating, decisive and impactful. Her music videos are gritty, and her thin frame stays covered in clothes and costumes that fit her personality and creative objectives. “[The way I read poetry] builds off my experience as a performer to take it to the next level of what I am reading.” she said. “I get into character so even though I am reading off the page, I am also adding words. It’s about coming alive in many different ways. Not only did I write this, I am a part of the telling of this poetry. I am a freestyle rapper; I always have to be on my toes.”

Camae “Moor Mother Goddess” Ayewa is a transcendent artist. It is important to read about her, but it is much more important to listen to her. Listen to her music, listen to her words, listen to her voice and listen to what her entire being is striving to express—her unique observation of the world that is unadulterated, compassionate and, above all else, unapologetically gritty.