The David Dinkins Tennis Club serves up another season 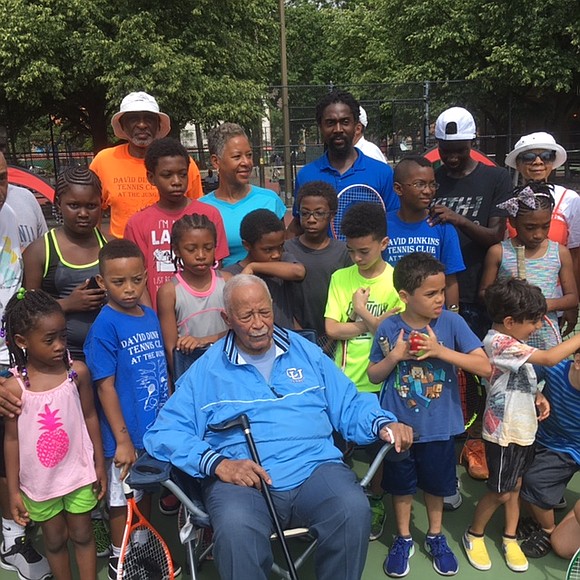 It’s not too late to sign up for the David Dinkins Tennis Club, held every Saturday morning, 9 a.m. to 11 a.m., for children 10 years of age and younger. It’s free. Balls and racquets are even provided. The program utilizes the tennis courts of the Fred Johnson Park, affectionately known as the Jungle, located at Seventh Avenue and 150th Street in Harlem. The club, in its eighth year, puts as much emphasis on parental participation and reading, book sharing and book distribution by its participants as it does on athletic activity.

“We give the kids books every week,” said the program’s co-founder, Sam Penceal, a retired principal and educator who started the program with his wife, Dr. Bernadette Whitley Penceal. “We ask them to share the books with their friends when they’ve finished reading them. Parents are asked to supervise the swapping of the books and to recruit other parents to be a part of this effort.”

It’s all part of the initiative that honors Penceal’s wife, who took great pleasure in  disseminating books and engaging club participants in early morning conversations in the park. She was a very gracious woman who recently died. “Teaching reading and writing to children, encouraging literacy was her life’s work,” said Penceal.

The initiative is also a tribute to New York City’s former mayor, the Honorable David Dinkins, who the tennis club is named after for his efforts during his administration in revitalizing the city’s public libraries. Dinkins, New York City’s 106th mayor, serving from 1990 to 1993, attended Saturday’s opening-day festivities, which included a 90th birthday salute to him and a surprise visit by USTA President and Chairwoman  Katrina Adams.

Adams, who has a tennis program of her own that she presides over, the U.S. Open, the fourth and final of the majors that constitute the Grand Slam (it begins at the end of August), also spoke to the young club members about the value of reading and networking, making friends and establishing relationships. The mayor, always building bridges, spoke about the importance of working together, looking out for one another and the spirit of cooperation.