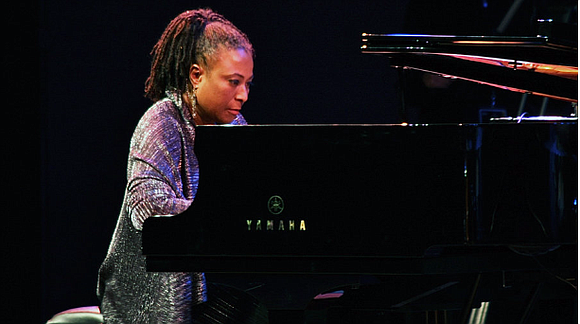 Geri Allen, the pianist, composer and bandleader, whose music was too varied to be categorized, from straight-ahead to her engaging Motown interpretations to the brilliant colors of her avant-garde melodies, died June 27, in Philadelphia. She was 60.

The cause was cancer, said Ora Harris, her manager of 30 years.

Allen enjoyed a very successful 30-year performing career as a New York City jazz musician. Four years ago, she relocated and became director of the Jazz Studies Program at the University of Pittsburgh.

Before that position, she was a faculty member at Howard University, the New England Conservatory and the University of Michigan, where she taught for 10 years.

The Guggenheim Fellow was one of the producers of the expanded and re-mastered recording of Erroll Garner’s “The Complete Concert by the Sea,” which garnered her an Essence Image Award nomination as well as a Grammy Award nomination in 2016.

She felt strongly that students should have access to this material, and she went on to organize a 60th anniversary performance of the material at the 2015 Monterey Jazz Festival with the pianists Jason Moran and Christian Sands.

Her many awards include an honorary doctorate of music degree from Berklee College of Music in Boston (2014). Congressman John Conyers Jr. presented her with the Congressional Black Caucus Foundation Jazz Legacy Award in 2014. She was the first recipient of the Soul Train, Lady of Soul Award for Jazz. In 2011 Allen was nominated for an NAACP Award for her Timeline, Tap Quartet Project, and she was the first woman and youngest person to receive the Danish Jazz Par Prize.

“She was ubiquitous in terms of giving to the musicians and audiences,” said the drummer Andrew Cyrille. “She was absolutely dedicated to the music and was always continuing to grow.”

Geri Antoinette Allen was born on June 12, 1957, in Pontiac, Mich., and grew up in Detroit. Her mother, Barbara Jean Allen, was a defense-contract administrator for the United States government. Her father, Mount Allen Jr., was a principal in the Detroit public schools.

“Geri called Marcus her musical father,” said the singer Joan Belgrave (Marcus’ widow). “I loved her as my sister. She was not only the pride of the Detroit jazz world, but was the most giving and loving person I have ever known. To be on the bandstand with her or watch her from the stage wings was always a spiritual encounter.”

Belgrave would go on to appear on Allen’s albums “The Nurturer” and “Maroons” in the early 1990s. From another mentor, the late drummer Roy Brooks, Allen developed a passion for Thelonious Monk, whose compositions

In 1979, she was one of the first students to graduate from the Howard University jazz studies program, under the direction of the trumpeter Donald Byrd.